Lessons from Wabbaseka By Liza O’Connor

Since I was born and raised in Arkansas, then moved and lived most of my adult life in New Jersey, I can tell you for certain each state has their own rudeness technique.

An Arkansas rudeness will often be coated in fake sugar. They have made an art out of insulting people with what ALMOST sounds like a compliment.

A New Jersey rudeness will be far more direct. (Expect an FU and a bird) 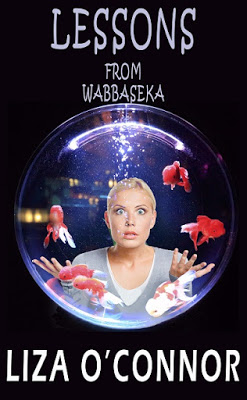 When Anna Baker is fired from her New York job, she accepts her aunt and uncle’s offer to come live with them in the little town of Wabbaseka, Arkansas. She discovers a house in dire need of repairs and her relatives in need of proper care. Under the misconception that being unemployed means she has no money, the local sheriff gets involved in her life, trying to determine how she can afford the building materials to fix up the house. Her cousin, Dewayne, appears and wants her evicted, and the FBI thinks she’s involved in a money-laundering scheme. While Anna doesn’t find the peace and quiet she seeks, she may find love…

An informal reception line seemed to have grown so the entire town could meet Anna. Everyone got in line, except for one man in the back of the church, who watched her like a hawk. When Anna had greeted the last of the people, she helped the ancient-ones shuffle toward the back door. The tall, slender man stepped out into the aisle as they neared. His light brown hair cropped close to his head and his chiseled jaw set him apart.

He nodded in her direction but didn’t offer her his hand. “Miss Baker. I’ve heard a lot about you.”

Anna sensed the man’s words meant more than a casual greeting. Deciding she was just growing paranoid, she shook off her concern and thanked him. “How long have you been sheriff here?”

“For about a year. I came here to retire, and then discovered I didn’t like retirement.”

Anna thought he looked a bit young and far too spry to be close to retirement age.

“The sheriff is from a big city, too,” her aunt added.

“Houston,” the sheriff clarified. “And you’re from New York City?”

“But honey, you worked in New York City.”

The sheriff’s light blue eyes studied her with an eerie intensity. “What was your line of work, if you don’t mind my asking?”

“What does a financial analyst do?”

“I did business modeling on potential acquisitions,” Anna replied, feeling as if she were under interrogation.

“Sounds like a good job. Why’d you give it up?”

“I was laid off. With the economy being bad, the company stopped making acquisitions.”

“So what do they do when the economy improves?”

“Hire another. If you’ll excuse me, I think my aunt and uncle are getting tired.”

“Of course. I noticed you sitting with Adams. Y’all friends?”

“So you’re not friends?”

Anna was confused by his question. “I’ve only known him a week, what’s your definition of friends?”

God help her! She didn’t have time for this shit. “I’ll have to think about that. But right now, I’d best get my aunt and uncle home.”

Anna had had it with his attitude. “I’ve got a car.”

“You planning to re-register in Arkansas?”

“Probably? Does that mean you might not be staying?”

“It means I haven’t given the matter any thought.”

“Well, if you stay in the state more than 90 days, you’re legally required to register the car in Arkansas.”

“Thank you for the notice. Now I really have to go.” She now wished the man had retired—someplace else. What a nosey pain in the ass!

Liza O’Connor lives in Denville, NJ with her dog Jess. They hike in fabulous woods every day, rain or shine, sleet or snow. Having an adventurous nature, she learned to fly small Cessnas in NJ, hang-glide in New Zealand, kayak in Pennsylvania, ski in New York, scuba dive with great white sharks in Australia, dig up dinosaur bones in Montana, sky dive in Indiana, and raft a class four river in Tasmania. She’s an avid gardener, amateur photographer, and dabbler in watercolors and graphic arts. Yet through her entire life, her first love has and always will be writing novels.