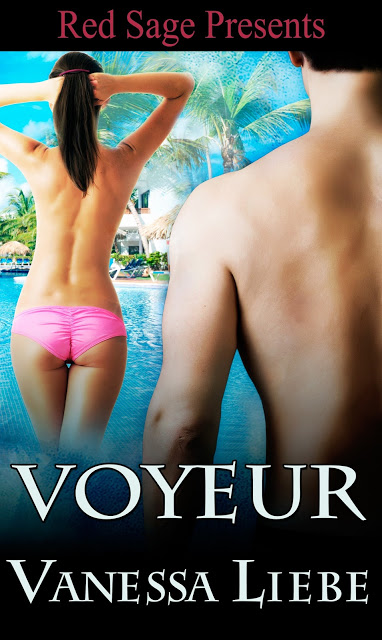 Indulge in five stories of voyeuristic erotica, where the voyeurs find themselves wet or hard and longing for something more. Will they get it?
In Good Neighbors, Mandy accidentally spies on her neighbors’ twenty-year-old son, John, sunbathing naked in the garden, and can’t resist using the moment to relieve some tension. When another opportunity to watch him presents itself, Mandy finds she is unable to turn away, but she’s not expecting a confrontation with John in the morning where she discovers just what a good neighbor he can be.
Room with a View tells the story of James, a business man staying in a hotel for a conference. He’s unprepared for his room to come with clear sight of the occupants in an apartment opposite, or the show they put on. For two nights, he has a titillating spectacle and then he is invited over to indulge in a private show involving wax play and to participate in an exhilarating threesome.
In Voyeur’s Initiation, we meet nineteen-year-old Alana, an avid voyeur who has learnt a lot about sexual diversity from watching her neighbors. She thinks she knows what she likes until she is caught red-handed watching a couple having oral sex in a changing room and takes them up on their offer to participate. Can they show her what she really needs?
Forbidden Temptation is the story of Megan and her guardian. She comes home from university to see her guardian pleasuring himself whilst thinking of her. Finally having the proof she needs that he desires her, she is determined that he gives in to temptation. When he does, it results in a delicious spanking for Megan and much more.
Skinny Dip sees Adam, a landscape gardener, becoming an unintentional voyeur to a beautiful lady taking a skinny dip, before pleasuring herself. What Adam doesn’t know is that the lady is his employer, having chosen him deliberately as she wants more from him than his gardening skills. 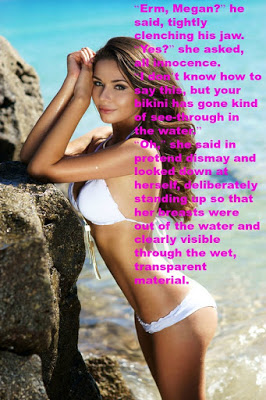 Alana was so absorbed and was madly stroking her clit when the man suddenly flung his head back in pleasure as he came in the woman’s mouth. She had a close-up of his handsome face and received a big shock when he opened gorgeous green eyes and looked right at her, giving her a wink.
She gulped and blushed, embarrassed at being caught spying on them, yet unable to look away from him.
“Why don’t you come and join us, sweetheart, instead of standing up there?” he said. “I saw you admiring my cock in the swimming pool earlier.”
Alana chewed her full bottom lip, wondering if she had heard correctly and whether she should indeed join them.
The blonde meanwhile had swallowed the hunk’s cum greedily and stood up. She also looked up at Alana and smiled. “Yes, come and join us. It’s a pity to only watch.”
Alana felt nervous but she was keen to join them. They were so sexy and maybe this was the right time to let someone actually touch her body. 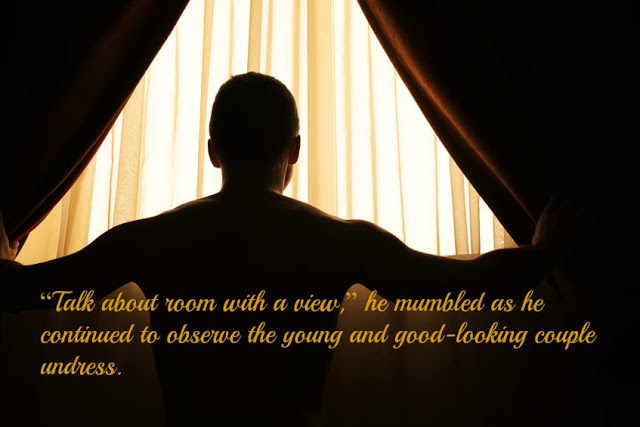 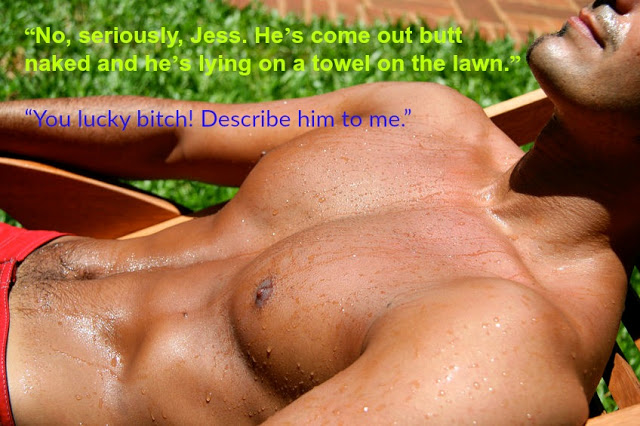