Not What He Thought, by Melissa Kendall #ParanormalRomance #Werewolves

NOT WHAT HE THOUGHT 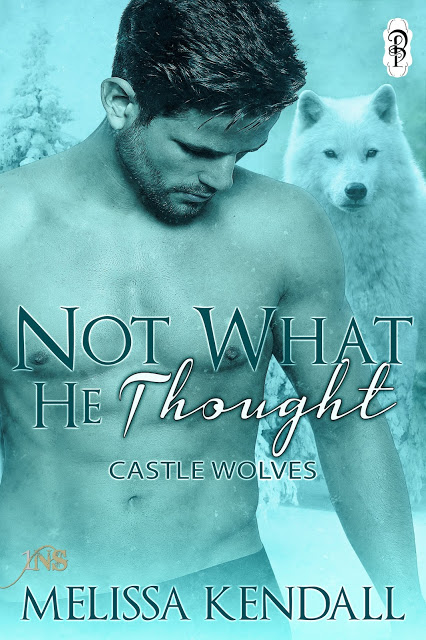 Mason Taylor is beta of the Castle Wolves pack. Most people would describe him as a skirt chasing manwhore but in reality it had been years since he found any kind of satisfaction with a woman. Like his Alpha was, he is lonely and wants desperately to meet his mate. After seeing his Alpha find love and happiness through Madame Eve he decides to give it a try. He gives Madame Eve just one instruction – find him his soul mate. The moment he walks into the room, he catches his date’s scent and knows instantly they are his mate. When he sees the person though he is shocked there has to be some mistake.
Sebastian Cooke has always known he was gay but growing up in the wilds of Alaska, he has always found it hard to truly be himself. After his friend and fellow pilot, Kate, suggests he give 1NS a try he figures he has nothing left to lose. The last person he is expecting to show up in his hotel room is Mason Taylor.
Can two men get over the preconceived notion of who each other is to find the love they have been desperately looking for?

Reaching the right floor, he opened the door and made his way down the hall. The number on his key was two-twenty and a glance at the first door on the left read two-ten. A brisk walk down the seemingly endless hall and finally, he stood outside the right room.
He raised his hand to knock on the door but stopped dead in his tracks. The scent that had haunted him for nigh on a decade hit him like someone had sucker punched him.
It can’t be.

He’d never told anyone about that night. He barely admitted to himself it happened except in his dreams where he relived it time and again.
Instead of knocking, he put his hand in his pocket and pulled out his keycard swiping it through the lock before he could change his mind. There was a better than even chance the person in the room would slam the door in his face before he even got a chance to explain.
He pushed the door open and stepped inside. The full effect of his date’s scent hitting him hard and sending all his blood flooding to the giant erection in his pants.
This is going to be interesting.

***
Sebastian jumped. The click of the door opening catching him completely off guard. He put his hand to his chest as his heart thumped wildly. He turned to see a giant of a man stepping through the door. Big broad shoulders, muscles upon muscles and dark brown hair just long enough to hold onto as he’s fucking you into oblivion. His cock hardened at the thought. It had been a long time since he experienced true ecstasy with a man, since that night so long ago.
As the guy closed the door and turned to face him, his rapidly beating heard plummeted to the floor.
“Fuck.” Sebastian couldn’t believe it was him. Out of all the men Madame Eve could have sent, it was the one he never wanted to see again.
“Well hello to you too.” Sebastian didn’t know what to say so he didn’t say anything. “I’m Mason Taylor. Your date.”
Sebastian stared at the hand Mason held out for him to shake. Was this guy for real? “Un fucking believable.”
“Sorry was just trying to be polite.” Mason pulled his hand back and wrung his hands together in front of him like a little boy waiting to be told off.
“You really think I have no idea who you are? Mason Taylor— manwhore extraordinaire. Everyone from here to the Canadian border has had a turn with you.” Including me. Mason cringed at his words. He hadn’t meant for them to come out with such a venomous tone but seeing Mason again up close and personal after so much time was like a kick to the gut.

Melissa Kendall is a forty-year-old mother of two from Perth, Western Australia, the second-most isolated capital city in the world. Predominantly a stay-at-home mum, she works a few hours a week as a software support consultant. She has always loved to read and write, and spent most of her teens writing poetry and short stories. Over the years, daily life got in the way and she lost the passion for it, but after the birth of her first child, Melissa discovered e-books and her interest in writing rekindled. She is now the author of four published short stories. Matronly Duties is her first full-length novel.