Welcome to Friday Flames, where literary heat will warm your senses! 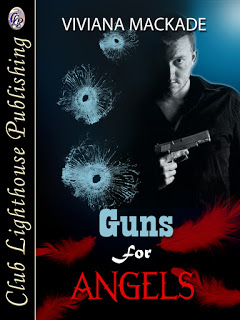 From a rich bedroom, a murder is ordered.
She had to die. Yoga instructor Ann
Holloway’s sunny life is wrecked when a group of men break into her apartment
and kill her sister. A rough, broody stranger snatches her from the killers’
jaw, but she has no clue about who these people were or the reasons behind the
attack.
He was too scarred to really live. Burned-out former
Marine and leader of the Team, Mark Carson thought he was doing a teammate an
easy favor by picking up a couple of girls. How wrong. When his friend is
killed, shadows build over the Team’s loyalty, and Ann’s life starts meaning
more than his own, Mark is thrown into a different game. Now it’s personal.
From NY to sunny Miami, Ann and Mark run into a
maze of lie, betrayal, and death, where love is the only, terrifying certainty.
And when truth unravels, they will risk all to
survive.
Excerpt:
THE AIR WAS SOAKED with
heat. The few particles of oxygen that didn’t drown didn’t quite reach the
bottom of Ann’s lungs. It was thick and sultry.
Perfect.
The sky, clean and huge,
supervised Miami with its merciless blue stare; underneath, cream and red beach
chairs hemmed the topaz water of the pool; further on, a white rail closed the
world away.
Sitting on the poolside,
Ann inhaled all that summer mugginess like the most refined smell. As her feet
splashed the perfectly cool water, she closed her eyes, tasting the freedom. It
wasn’t real, but lying for few moments would help keep her sanity. She needed
to pretend it was just a vacation.
“I give you ten minutes
before you’re burned,” Mark said, standing at the poolside. He hadn’t changed
from jeans and t-shirt, but didn’t seem too bothered about the implacable heat.
“I can bring the umbrella closer if you want.”
“Don’t worry, I’m okay.
Unless it’s too hot for you, and you want some shade. I mean, you’re fully
dressed.”
He sat at her side, took
off his shoes and rolled his jeans; for a second, Ann saw him young and
carefree, getting ready for some fun. “I was born in this sun,” he said. “I
don’t burn. I don’t get too hot.”
“Excuse me, Mr. Florida.”
She didn’t see it coming.
She felt his hand on the small of her back, a steadfast shove and then sassy
cool water everywhere. The quivering shape of Mark chased away the leftover of
black memories. The last time she was under water, it hadn’t been of her own
will. But he was up there, and she was safe.
Ann let herself drawn in
the pleasure of the wet, muffled world around her. When she touched the bottom
of the pool, her mood was flying high. So much so, that she thought his pushing
her into the pool deserved retribution.
She met the air with
thrashes and messy pushes, up and down the surface, gurgling words and spitting
water. “Can’t… swim.”
A splash, and Mark’s arms
were around her. He pulled her up, tight against his chest as his worried eyes
inspected her. “Are you all right?” he rushed. “I’m sorry, I didn’t know, I’m
sorry.”
As mean as it was,
laughter bubbled in her throat; she tried to contain it by pressing her face
against his shoulder.
“What?” he asked, even
more worried than before. “Talk to me, Ann.”
She let it free, a full,
rounded laugh, shaking her from head to toes. She clung onto him as it wore
off, feeling guilty and giggling when she met his even face.
He ran a hand over his
eyes to wipe away rivulets of water dripping from his hair, his face, his neck.
Did he know how good he looked right now?
Under her palms, he was
solid as a rock, all tough muscles and warm flesh. His heart beat fast and
strong. She scrambled closer against him, wrapping her legs around his waist.
“Do you really think I can’t swim?” she asked, her throat suddenly tight.
“Would I take the chance?”
His lips were beautiful,
their hard line calling to be smoothed, seduced into a smile or a kiss.
“I’m completely dressed,”
he scolded.
She lifted her chin, the
laugh still in her eyes. “Well, next time think twice before pushing me into a
pool.”
He tightened his hold on
her waist. “That’s very mean.”

“Okay. But you started it.”

“I’m glad,” she said, looking down at his mouth. Mark didn’t fight. He didn’t want to. Not with the
heat of the sun rubbing his back and her cool fingers skimming up and down from
his neck to his short hair. He was tired of holding back, tired of wanting her
and denying himself the salvation hidden in her arms.

She surrounded his brain
like the mist of a dream, a sinful fairy wet and smiling. And strong and
delicate like the words of a spell, she surrounded his body. Her hard nipples
rubbed against the thin fabric of his t-shirt. Her lips were parted, and when
she licked a bead of water he stopped breathing.
His palm found the small
of her back, slid down to grab her and press her hard against his aching
crotch. Her sharp intake of breath punched on his brain.

He knew that danger lurked
over them, knew that he would be ashamed of letting his desires run him, but in
that moment, everything he needed surrounded him. The heat, the rocking of cool
water, and Ann.

Kissing her wasn’t the
only thing he could do. It wasn’t the right thing to do, either. But if he
didn’t do it, he might as well get out of the water and put a bullet into his
head. So he kissed her.

She didn’t hesitate, but
grabbed his hair and pulled him in. The taste of her, the way she answered to
his mouth, the dance of her hips against his seized upon his control, upon his
better judgment.

Wild with need, he pushed
her back against the pool wall. Both hands ran down her sides, squeezing her
waist, losing willpower, losing himself as she rubbed against him.
Her breathing was a war
cry; her legs the sweetest torture; her hands weapons whose feather touch hit
him hard and low.
Thoughts were far away, so
were the reasons why he believed he shouldn’t take her. He only had to unzip
his jeans, push the tiny bikini aside and he would be inside her, where he
belonged.
He hit the wall of reality
with a crush at the noise of the door crashing open.
His mind stripped down to
icy clarity, his body switched to combat mode. He turned, pushed her behind him
to shield her and face whoever had walked in.
Three girls, armed with
big beach bags. They looked at them, and left for the chairs, giggling and
whispering.
As the adrenaline wore
off, Mark looked for Ann’s face and his heart nearly drowned for what he saw.
Her eyes never lied. It wasn’t gratitude, and it wasn’t just sex. It was
something beautiful.
Shitless scared, his heart
drummed a hymn of joy. Gently, he sat her on the
poolside. “I need to change.” He pushed himself out of
the water.

“Mark,” she called, but it was too late. His eyes shunned away from hers as he handed her a
towel. Without a word, he walked away.

Amazon, available as
e-book and paper on demand. 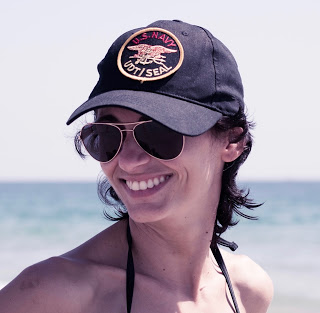 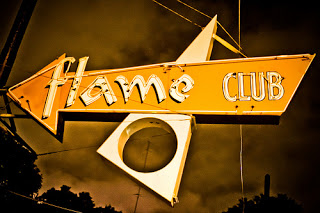 Thank you for having Mark and Ann!
Vivi