LORD OF THE JUNGLE

Book 1 of the JUNGLE ISLAND series 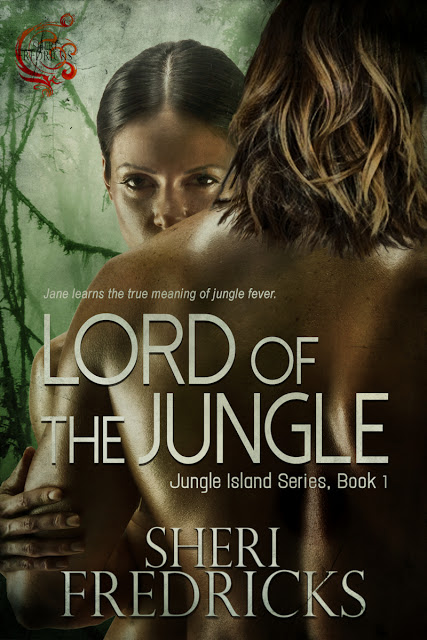 A shipwrecked woman.
The uncharted island.
Jane Porter craves a thrill but when marauders scuttle her ship and she washes ashore onto an island inhabited by animals and one sexy wildman, that’s when the real adventure begins. Dependent upon her vine-swinging rescuer who acts more ape than musclebound man, she places her survival in his rugged hands and relinquishes her desire to his raw sensuality.
For more seasons than he can remember, Tarzan has lived among the tiny island’s gorilla band. Instinct propels him to save the female he finds half-dead in the surf, but gazing into her eyes, his mating tool dances an ancient tribal beat.
While the pirates search for their bounty, Tarzan and Jane are in danger. To survive, they’ll have to hang onto each other as they swing for dear life. Their adrenaline-rush of passion among the canopy of the jungle threatens not only a dizzying fall from a great height, but also into love.

“Jaguar’s gone.” She swung her attention back to him, and stared at his lengthened male part. “And I have a feeling my clothes will be, too.”
Whatever she’d said to his tool, it must have involved her mouth, because she licked her lips.
“Uh-uh.” He pulled on the flowered blue that covered her breasts, then pointed at the tougher shield over her legs. All females bore an opening in which the mating part slid in and out.
At the thought, his tool jumped. Tarzan wrapped his hand around the hardened length to subdue it.
“Here? In the tree?” With her brow wrinkled, the female appeared to become agitated again. “Seriously?”
He gazed down at her, wondering what caused such a reaction when moments before she was all sweet sounds and closed eyes—a sign of her readiness to mate. Hmm. It first happened when he’d touched the covering between her legs. Females in his family didn’t like their hair stroked in the opposite direction. Perhaps it was the same for this human female.
For the sake of his heavy mating tool, he tried again, reaching to stroke a soothing path over her covered breast.
Her eye-skin drooped.
He did the same to her other breast.
More drooping.
“Ooh-ooh.” A smile pulled the edges of his mouth. He was getting the hang of this mating thing. But the breast cover wasn’t his female’s skin, and he wanted to know the softness for himself. He skimmed a finger over her dewy cheek, then tugged at her shoulder where the cover lay bunched up. How could he unwrap this succulent fruit?
Unsure how to proceed, Tarzan straightened and leaned against the tree again, crossing his arms to think out the matter.
“Alright, I get it. You won’t get me out of the tree until I take my clothes off. By the way, when’s the last time you had a haircut?”
After the female stopped her chatter and flashed a quick, lopsided smile, her hands grasped the bottom of the breast covering and slowly peeled the damp cloth over her head. 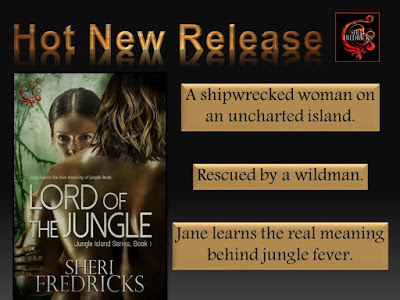 Always on the hunt for the uncommon things in life, award-winning author Sheri Fredricks thrives on creating romantic adventures.

A former engineering secretary, she lives on California’s beautiful central coast. “I wanted to move away from a profession of inflexible right angles and create an unboxed world with no boundaries.” A voracious reader since her early years, Sheri found her brain crowded with stories of her own. “Ultimately,” she says, “my husband encouraged me to write them all down.”
Winner of the Paranormal Romance Guild Reviewer’s Choice Award, and a Finalist multiple times for InD’Tale eMagazine’s Reward Of Novel Excellence award (RONE), she has numerous five-star reviews everywhere eBooks are sold.
Sheri loves to spend time at home and connecting with readers. A computer hutch keeps her focused on creating stories, but the panoramic view of life on a ranch will call her outside to play in the sun.
AMAZON ✯ WEBSITE ✯ FACEBOOK ✯ GOODREADS ✯ TWITTER ✯ PINTEREST ✯ GOOGLE+ ✯ LINKEDIN ✯ NEWSLETTER 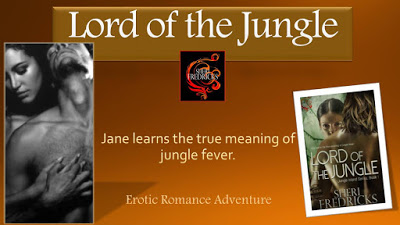 Now that is some sweaty heat in the jungle!!!