WARNING: The contents within this post are adult orientated. Do not continue unless you are 18+. 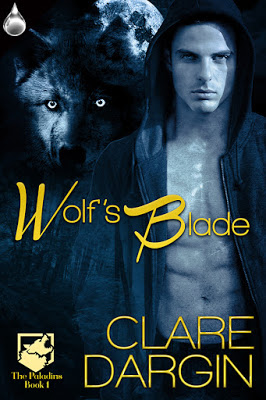 Contemporary, Erotic, Shifter, werewolf, MF, Romance
Samantha Dixon rescues a wounded wolf shifter in the woods near her home … and unwittingly gets drawn into a dangerous game of cat and mouse with a murderer. Callum Blake is on the trail of an evil man who would be king of all wolf kind, no matter the cost … it’s up to Callum to stop him. Can Callum fulfill his duty to protect his pack and save the woman who is destined to be his mate? Filled with passion, action, and suspense, Wolf’s Blade is Book 1 of Clare Dargin’s new paranormal romance series, The Paladins.

He finished loading their bags into the truck and walked over to her and kissed her. She leaned into the kiss. It was both sweet and sexy, filled with the same passion he showed her the night before. She gave in to it, his heat, scent, and licorice taste. Heat surged through her, setting her nerves on fire. Her nipples puckered against her shirt and her pussy dripped moisture, wetting her panties.
“Mmmm,” Callum said, pulling away with a hiss. “I can taste your arousal.”
“I guess the alpha can wait a while longer,” she replied in between nipping his lips.
They chuckled as they ran inside the house. Stopping in the bedroom, they hurriedly undressed as their mouths hungrily kissed. She reached her hands out and grabbed his shoulders. She leaned onto him as her legs quaked beneath her. She blinked up at him and almost gasped at the glance he directed to her. His gaze was so intense, it glowed. Her skin prickled from her arousal. It was the sexiest thing she’d ever seen. His wolf had power and that was so hot. Her breath shuddered. He kissed her shoulders and her neck, then sucked where he had kissed. Her nipples pebbled because of his touch, while her pussy gushed.
All rippling muscles and hard angles, he was a work of art. Her gaze traveled down his body, toward the stacks of defined muscle covering his abdomen. Her mouth watered at all that tight toned flesh. Her teeth ached to bite into the wall of hard muscle, to nip into the dense flesh.

✯✯✯✯✯ New twist on a shifter story
By Layne on January 13, 2016
Author Clare Dargin has given us a unique take on the concept of wolf shifters vs lycans in her book “Wolf’s Blade.” Rather than them being one and the same, they are actually two different species. Although both are dangerous in their own right, the rare individuals who are a combination are especially a danger.
So when the hero, Callum Blake, who is one of those rarities, finds a potential mate, he is torn by conflicting desires. He must protect her not only from a treacherous ex-packmate, he must protect her from himself.
I really enjoyed this story, the first in a new series, and look forward to upcoming releases. 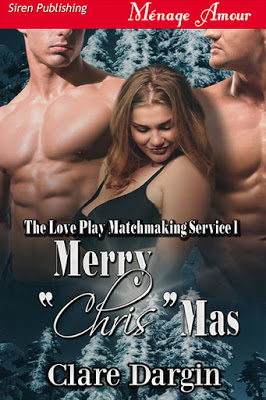 Contemporary, Erotic, Menage, MFM, Romance with a paranormal element
Jilly Reimers wants love but can’t find it. Chris Spinell is a veteran of the war in Afghanistan who suffers from PTSD and a haunting feeling that something is missing in his life. Chris Poole is also an Afghanistan war veteran is ready to break out of his shell but is unsure how. With Christmas just around the corner, they decide not to spend it alone. Believing The Love Play Matchmaking Service to be just what they need for a night of fun and passion, they sign up. But when the guys show up and see that they’ve been set up on a menage, the only one happy about it is Jilly. Their consultant, called an Eros, assures Jilly that the service has a perfect track record but she’s certain they’ll be the first ones to get their money back. Will they have a very merry Christmas? Or will the three spend yet another one alone?

Chris S. slipped her undies over her round hips. They slid down her baby-like skin, exposing her shaved mound. More blood flowed to his dick, making whimper.
“God,” he said, fighting tears.
Through gritted his teeth and clenched his eyes, he forced himself to maintain control. It was getting to be damn near impossible. Everything about her was fucking outstanding. Lips, breasts, skin and pussy. He was ready to fill her pussy with his thick, hard dick.
He slid his finger into the folds of her wet interior. The thin crease surrounded by supple labia oozed moisture from her tight and tiny hole. He slid a finger inside her hole, and her taut muscles quivered at his touch.
“You want it?” he asked.
She moaned “yes” before being silenced by the other Chris’s mouth. He inched her legs apart. Moving in just right, he tasted her. Explosions went off in his brain. She was pure, simple, clean and honeyed. He wanted to mark her as his own. Delving his tongue in and out of her tight hole, he held her still, allowing her juices to saturate his mouth.
Lifting her legs, he opened her wider, curling her upward, burying his face in her mound. His breaths increased as his heart rate grew frantic. His hard dick, standing at full scale attention, threatened to bust a nut if he didn’t stop.

✯✯✯✯ A Good Read!
ByArlenaon March 6, 2016
Wow, this was a quick good read. Now if you are into erotic menage settings…then this is a read for you. Now, this is a adult read so be aware of that. This author really works it with these ‘three lonely individuals’ especially during the holiday season who were seeking happiness. What will happen when Jilly Reimers who is looking for love meets Chris Spinell and Chris Poole who just happened to know each other being that they were both war veterans of the war in Afghanistan? Will “The Love Play Matchmaking Service that has been set up my a sister and friend be able to help these two men find the love they longed for? What will happen when the three find out they have been set up in a menage by this service? Be aware that there is plenty of hot steamy sex scenes. In the end will Jilly, Chris S and Chris P get the Merry Christmas they wanted? To get the answers to these questions and so much more you will have to pick up ‘Merry “Chris” Mas’ to see how well this author presents this very intriguing ‘menage’ story to whether these three get their wish. There seems like there will be more in this ‘Love Play Matchmaking Service series.’