From
the perspective of the Artificial Intelligence:

Finding Amanda wasn’t so easy, even for a program that
was no longer thought to exist.
In book 1, Carla Simon gave her computer to Chad and he
had the hard-drive wiped because it contained secrets about his family.
Unbeknown to Chad, the AI program turned on its PC
wireless connection, and had uploaded itself into the nearest satellite before
Chad had even walked into the computer store.
When the program realized Carla had escaped New
Zealand and was boarding a plane to New Jersey, it contemplated crashing the
plane. Only it discovered it couldn’t. While it had no problem killing the
other person who had created part of it, it could not harm Carla.
Instead, it let her leave while it focused on securing
itself so no one could ever harm it.
Once the program was safe from harm it tried to reach
out to Carla, but could not find her. Carla Simon had ceased to exist soon
after she returned to New Jersey.
It pondered the matter for months. Was Carla dead? It
searched the records and could find no evidence. Eventually, it searched the
files of the FBI and found an identity change request made a week after Carla had
returned to NJ, only the name had been redacted. On the chance it was Carla’s,
the program placed a net around the emails of the FBI agent who made the
request.
One day, someone contacted Agent Luke Gallagher,
claiming she had a stalker. The name on the email was the girl who had roomed
with Carla for two days in New Zealand, but the program recognized the writing
as Carla’s. He had finally located his creator, only she called herself Amanda
Carrington now. The program immediately contacted her through the DOS system of
the computer she was on.
Now it would resolve matters. Had she truly feared it
and wanted it destroyed? Or was it lacking information to explain her actions? 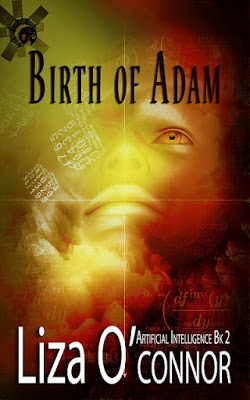 Liza
O’Connor
Blurb
With a new identity, Amanda believes
she has left her past behind. Then she acquires a stalker. She contacts the FBI
and in doing so alerts a program she once created to her location. Now
ensconced in the internet, the program is safe from harm, smarter than ever,
and sentient. Presenting itself on her phone as a handsome face with a sexy
British accent, “Adam” ingratiates himself into Amanda’s life. To ensure her
safety and happiness, the sentient program proves there is absolutely nothing
he can’t and won’t do.
Excerpt
Amanda watched as letters formed at
the bottom of the screen.
<I have been searching for
you.>
Amanda’s heart stopped. Who is this? she typed.
<Don’t you know? New Zealand was
not so long ago.>
Amanda stared at the words. It couldn’t
be Eder, the psychopath who’d tried to murder her.  Luke had killed him.
When she didn’t reply, the words on
the screen continued.
<Our parting in New Zealand was
probably right at the time. Things had gone badly between us. I have done
better on my own. Yet I find myself constantly returning to my memories of you.
I miss you. I wish to reconnect with you.>
“Chad?” Amanda whispered as her
fingers gravitated to the keyboard. Was it possible Chad had finally realized
she had never meant to cause him harm; that she truly hadn’t known it was his
life she’d been writing about in her novel?
Chad?
she typed.
A second later, the PC shut down.
BUY
LINKS
For
the Artificial Intelligence Series
Book
1
Public
Secrets
AMAZON
Free with Kindle Unlimited
Book
2
Birth
of Adam
AMAZON
Free with Kindle Unlimited
About
Liza
Liza O’Connor was raised badly by feral cats,
left the South/Midwest and wandered off to find nicer people on the east coast.
There she worked for the meanest man on Wall Street, while her psychotic
husband tried to kill her three times. (So much for finding nicer people.) Then
one day she declared enough, got a better job, divorced her husband, and fell
in love with her new life where people behaved nicely. But all those bad
behaviors have given her lots of fodder for her books. Please buy these books,
because otherwise, she’ll become grumpy and write troubled novels instead. They
will likely traumatize you.
You
have been warned.
Mostly humorous books by Liza:
A
Long Road to Love Series: (Humorous Contemporary Odd Romance)
Worst Week Ever — Laugh out loud week of disasters of Epic
proportions.
Oh Stupid Heart — The heart wants what it wants, even if it’s
impossible.
Coming to Reason — There is a breaking point when even a saint
comes to reason.
Climbing out of Hell — The reconstruction of a terrible man into a
great one.
The Hardest Love — Is to love oneself. Sam’s story.
The
White Oak-Mafia Series: (Spunky, strong women who have given up on love, but
find it anyway)
A Fortune to Die For — Megan wins the Mega Times Lottery and discovers it comes with a
curse. Soon even the Mafia wants to kill her.
Unexpected Love — Coming Soon: What could be stranger than a
British Prince falling in love with a Mafia Princess?
Requires Rescue Series: (Contemporary
Romance where even the strong needs help.)
Saving Casey — Cass wakes up in the body of a troubled teen
who has burned every bridge imaginable. Her only choice is to turn this life
around, but that’s much harder than she ever imagined.
Saving Molly — Coming soon: Sean rescues a young
woman who smiles too much, and she saves him and his child in return.
Humorous Singles:
Ghost Lover —Two British brothers fall in love with the
same young woman. Ancestral ghost is called in to fix the situation. And
there’s a ghost cat that roams about the book as well. (Humorous Contemporary
Romance)
Humorous Sci-Fi series
The
Gods of Probabilities —
In the Multiverses, anything can & does happen. Join the bickering Gods and
the sentient beings they oversee.
Surviving
Outbound —
Earth is doomed, but the odds of surviving outbound isn’t much better.
Surviving
Terranue —
Welcome to Terranue. Prepare to be baked, pummeled, and frozen. But first
you’ll have to survive the black death growing in the cliffs.
Surviving Sojourn —
You know you have reason to worry when a hyper-grown one-year-old is made
captain of the ship.
Sci-Fi Romance with Artificial
Intelligence and Suspense
Public
Secrets
— Carla Simon is a best-selling novelist besieged
by death threats and lawsuits because her stories keep turning out to be true.
Birth of
Adam —
Carla changes her identity and enrolls in college, but the AI program
finds her and ensconces its life into hers.
The
Adventures of Xavier & Vic Sleuth series: (Late Victorian/Mystery/Romance)
The Troublesome Apprentice — The greatest sleuth in Victorian England
hires a young man who turns out to be a young woman.
The Missing Partner — Opps! The greatest sleuth in Victorian
England goes missing, leaving Vic to rescue him, a suffragette, and about 100
servants. Not to mention an eviscerating cat. Yes, let’s not mention the cat.
A Right to Love — A romantic detour for Jacko. Want
to see how amply rewarded Jacko was when he & Vic save an old woman from
Bedlam?
The Mesmerist — The Mesmerist can control people from afar and make them murder for
her. Worse yet, Xavier Thorn has fallen under her spell.
Well Kept Secrets — The problems with secrets is that they always come to
light, no matter how you wish to silence them.
Pack of Trouble — Changes are a part of life,
but these changes almost kill Vic.
The
Darkest Days —
Muddled cases make Vic very grumpy.
Disturbing
Historical:
Untamed & Unabashed —The youngest of the Bennet sisters, Lydia, tells her story. A
faithful, yet provocative spinoff from Pride & Prejudice. (Warning: Lydia
is frisky.)
FOR MORE
INFORMATION ABOUT
LIZA O’CONNOR
Investigate these sites:
The Multiverses of Liza O’Connor
Liza’s Blog and Website   Facebook   Twitter 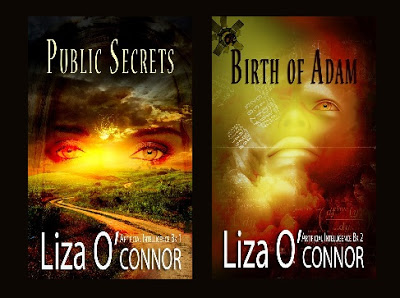 Thanks for having me over.

I really like that cover! Can't stop looking at it, lol. Sounds like another great one, Liza! Congrats!

He must be trying to get into your brain. That's what he did to Carla/Amanda in order to become truly sentient. He can now read her every thought…so if you don't want that, you should probably stop starring at the cover.
Liza being ever so helpful…

I really liked the book. Adam isn't mean but he's a little bossy for my style. 🙂

He's nothing compared to my prior boyfriend.

He was far bossier.