Book bundle sets are all the rage and often a great value for your dollar. Add contemporary western romance– and you’ve got yourself a Yee-Haw good time! 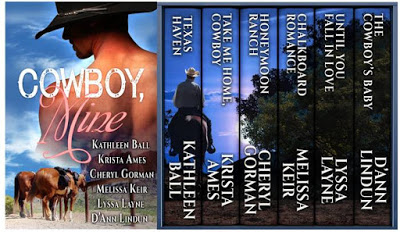 BLURB:
Chalkboard
Romance by Melissa Keir
Will a One Night Stand prove to be their
disaster or their salvation?
Lauren Walsh,
a divorcee and elementary teacher, wants to feel sexy again after her ex tosses
her aside for a younger woman. Her best friend encourages her to sign up for
The Playhouse–a renowned dating agency. Forced to stay away from his young
son, Mac Thomas lost the ability to trust. After the death of his wife, he
returned to care for his son but his sister wants more for him. She sets him up
with The Playhouse.
Passion
ignites but Mac’s a parent of one of Lauren’s students. A teacher and a parent
dating could cost Lauren her job and her chance at happiness. Will Mac be able
to convince the school and Lauren, that love is the most important thing?
EXCERPT:
They entered the posh elevator. The walls were a
gold which reflected their images back at them.
“What a pretty elevator. Look, we’re all alone.”
Lauren’s eyes sparkled. Mac watched as she licked her lips then bit on her full
bottom one. His heart beat faster.
Mac looked at the reflection of his body standing
behind hers. His cock ached. It had been hard since she walked into the bar. He
imagined her taste. Would she taste like raspberries or spicy like the bourbon
she reminded him of?
Mac leaned around her to push the button for their
floor. Bending closer to her shoulder, he inhaled her scent. It was a mix of
flowers from her hair and the musk from her desire.
Taking a deep breath, Mac pulled back before
looking into her eyes. “I’ve been wanting to kiss you since I saw you.” He
pushed the button to halt the elevator.
“What’s going on?” Lauren stared at him.
“I can’t wait for the room.” Mac pulled her into
his embrace then nibbled on her neck. He trailed his lips along her jaw toward
her mouth before kissing her deeply. Oh God. She tasted like sweet white
chocolate. Her moan vibrated into his mouth. He ran his hands through her hair.
It was as silky as it appeared. He pulled her closer so their bodies
were touching from lips to toes. She had no other choice but to feel how much
he wanted her. Mac ran his hands down Lauren’s body to grip her butt. Pushing
his tongue deeper into her mouth, he felt her heart beating against his chest.
Leaning toward her ear, Mac whispered, “I can’t wait to taste you. Open to me.”
Mac slowly pulled aside the neckline of Lauren’s
dress exposing her breasts. He bent his head down then took her nipple between
his teeth and gently tugged. A gasp escaped Lauren’s lips. His cock strained
against the zipper of his pants. I didn’t think I could get any harder. I
love hearing her passion. He sucked, drawing the nipple into his mouth,
eliciting a moan from her lips.
“Your mouth tastes like sweet chocolate yet your
skin tastes like peaches. I can’t get enough. You’re a feast for my senses.”
Desire made his voice deepen.
Mac pushed Lauren back against the wall then
kneeled on the floor. He lifted the hem of her dress. Damn, her panties are
in my way. Mac yanked on the fabric and was rewarded with a satisfying rip.
Lauren gasped again. Her responses were music to his ears.
“Look at me, Lauren,” he demanded as he lifted her
destroyed underwear to his nose and inhaled. “Mmmm…I wonder if your pussy will
taste like peaches, too.” A glazed look of passion entered her eyes as he
tucked the panties into his shirt pocket. “Oh, Lauren, I can’t wait to savor
you.”
Her deep uneven breathing echoed around them. She
arched her body closer to his mouth. Mac ran his tongue over her swollen lips,
lapping at her juices. “Yes, sweet Georgia peaches. My new favorite
fruit.”
Another moan escaped Lauren, inviting Mac to
pleasure her more. He took her clit between his teeth then gently bit down.
Lauren’s moan turned to a scream. Her orgasm flushed her skin deep pink,
eliciting a matching moan from Mac. Sweat broke out on his forehead from
holding himself back as he straightened her dress. He scooped her up in his
arms when her legs gave out.
“Let’s get to the room. I can’t wait to feel you
wrapped around me.” Pushing the button to start the elevator, Mac wished the
thing moved quicker.
ABOUT THE AUTHOR:
As a writer,
Melissa likes to keep current on topics of interest in the world of writing.
She’s a member of the Romance Writers of America and EPIC.
Melissa is always interested in improving her writing through classes and
seminars. She also believes in helping other authors and features authors and
their books on her blog.
Melissa doesn’t
believe in down time. She’s always keeping busy. Melissa is a wife and mother,
an elementary school teacher, a movie reviewer, owner of a publishing company
as well as an author. Her home blends two families and is a lot like the Brady
Bunch, without Alice—a
large grocery bill, tons of dirty dishes and a mound of laundry. She loves to
write stories that feature “happy endings” and is often found plotting her next
story.
Melissa loves
hearing from readers!
www.melissakeir.com
http://www.facebook.com/melissaakeir
http://www.facebook.com/authormelissakeir(fan page)
www.twitter/melissa_keir
Cowboy,
Mine… He’ll Leave You Breathless…
By the
best-selling and award-winning authors….
Kathleen
Ball, Krista Ames, Cheryl Gorman, Melissa Keir, Lyssa Layne, and D’Ann Lindun
Ebook ISBN: 978-1-939590-99-2
BUY LINKS:
Amazon ebook:  http://www.amazon.com/Cowboy-Mine-Kathleen-Ball-ebook/dp/B016QYF6PM/ref=sr_1_2?ie=UTF8&qid=1445033681&sr=8-2&keywords=Cowboy%2C+Mine
Amazon print: http://www.amazon.com/Cowboy-Mine-Kathleen-Ball/dp/1518613810/ref=sr_1_6?ie=UTF8&qid=1445033994&sr=8-6&keywords=Cowboy%2C+Mine

Can love shine through
the clouds of treachery and misunderstanding?
Advertising for a wife seems like the answer to all of Burke
Dawson’s problems. He wants a wife and kids without emotional attachments, but
he has no idea how much havoc one woman can cause.
Annie Douglas has her heart set on her hunky cowboy’s love
and she isn’t about to stop until she gets it.

Take Me Home, Cowboy by Krista Ames
When tragedy strikes,
will building tension and pride destroy a growing attraction or show them the
way home?
Ally Kincaid returns to Rock Creek, Wyoming, to see her
father after a two year absence. Anticipating a quiet family reunion, she finds
herself butting heads with Matt Gentry—her father’s foreman—instead. The man’s
arrogance and sexy drawl push all her buttons, making her wonder what he’s hiding
beneath his cowboy swagger.
When tragedy strikes, will building tension and pride
destroy their growing attraction or show them the way home?
Honeymoon Ranch by Cheryl Gorman
Can two reluctant
partners ride off into their own blissful sunset on Honeymoon Ranch?
When wedding planner, Summer Conroy, discovers she has
inherited half of Silver Creek Ranch, she is stunned to learn the other half is
owned by sexy cowboy, Bryce Jericho. Her idea of turning the ranch into an
exclusive wedding and honeymoon destination is met with a wall of resistance
from Bryce who doesn’t want his ranch ruined with a bunch of wedding nonsense.
He is determined to conceal his vulnerable heart that beats in fear of being
betrayed again. Will this woman with dreams of happily-ever-after in her eyes
transform his fear into love everlasting?
Until You Fall in Love by Lyssa Layne
Can a longtime
friendship suddenly blossom into love?
Single mom Jordan Glastetter doesn’t know how she’d survive
without her best friend, Abram Tomko. He’s the father her son never knew and
he’s the rock she’s always leaned on.
When Abram’s father suffers a heart attack, it’s Abram’s
turn to depend on Jordan, finally seeing her as the woman she’s become and not
the little girl he grew up with.
Will they risk their friendship for a chance at love?
Subscribe

Thank you for having me over today!!