Welcome to the 101stweek of My Sexy Saturday.

This week’s theme is My Sexy Woman. Yes, this is our nod to the heroines. You all know what make them sexy and wonderful. Need we say more! You know what we think is sexy and if you’re new to the blog, look at any of the past weeks. We don’t need to explain it. Sexy is sexy and everyone has their own idea of sexy.

Sexy can be anything, such as romantic moments like walks on the beach, a home cooked meal or even in another galaxy. It could be two lovers here on Earth dreaming about the day where they go on a magical vacation to another planet. Or staying right here at one of those wonderful places we can find in our own world.

In my latest
release (oooh, love that word!), I have a certain Troll who makes life
agonizingly rough for everyone. She’s hard to hate—you want to love her—but her
webs of deception weave tragic results.

Book 2 of The Centaurs series 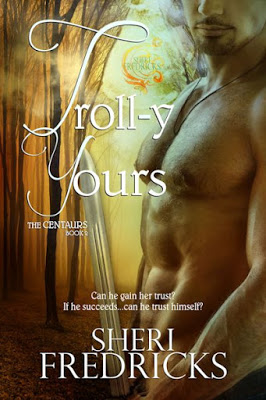 From his vantage
point on the hillside above the family nest, Eli propped a heel behind him and
leaned back. The rock digging into his butt was hard and unforgiving; it
matched the disposition of the older female Troll beside him.

Her slender
white neck curved as she used the glowing cherry of her herbal smoke to draw
tracers in the dark around the Centaur guard in the distance. “Who’s that with
Kempor Aleksander?”

“Good question.”
Eli stared with gritted teeth through the cover of trees at the embracing
couple. “She’s making a huge mistake.”

“How long have
they been dating?” Elegant fingers brought the cigarette to her lips, and she
pulled a slow drag. Multiple bracelets slid down her arm and jangled softly
together.

“I think they
just met. Ella opened the new speed-dating service, and the Kempor was in it
tonight—like he of all mythics would need it.”

“Hmm,
interesting.” Smoke blew in an easy stream from her pursed lips, catching the
cool night breeze that, in turn, drifted across his face.

Protected under
the trees from the drizzle, they watched the playboy hit on his sister. Ella
didn’t seem to mind.

Upwind, the
entwined couple had no idea their actions were observed.

“Is it true he
avoids relationships like he would the trots?” Eli asked.

Two fingers held
the hand rolled cigarette, as her lips tightened around it. She drew on the
end, let the smoke linger in her mouth a moment, then inhaled. Air currents
caressed the cigarette’s tip and caused the ember to glow between drags. “In
all the years I’ve known him, he only had one serious affair. And that one
dumped him for something better.”

Eli pushed away
from the boulder, away from scents of burning clove, and peered down at his
family’s rock. His mother stood out front, shouting for Ella. Gods, how embarrassing. Glancing up the
opposite hillside, he saw Kempor Aleksander drop his cupped hands from Ella’s
face.

Soft footsteps
drew next to Eli. His companion’s fingernails lightly scratched his back,
bangles dancing musically. “Don’t worry about her. If there’s one thing I know,
Aleksander won’t stick around for long.” The hair at his collar received the
same massage treatment. “Come over here, Eli. I want to talk business before I
leave.”

He followed his
contact back to the rock and watched her fluff out the skirt beneath a belt
that defined her small waist. He crossed his arms, widened his stance, then
waited for her to continue.

“There’s chatter
in Boronda of rebel movement. Heard any of it?”

Bracelets
sliding in a musical clatter, she clamped the short smoke between her lips. Her
hands became busy, pulling a small silver case from the voluminous folds of her
skirt, and she spoke around the cigarette, “What happened?”

“Phranq took an
interest in Ella at the café. When we left, he bull-handled her and the Kempor
took exception to that. We had to leave before they got into it.”

Her pointed
Troll ears twitched with the sounds of the night. Nobody knew how old his
contact was, but Eli guessed at least three centuries. If she were older than
that, she held her age well.

He waited while
she removed a fresh cigarette.

She lit the end
with the red tip of the old, and tossed the used butt into a puddle. Taking a
drag, she turned to him and asked, “Carryyn couldn’t distract Alek?”

“No. He didn’t
want anything to do with her.” Hell, Eli couldn’t blame the man. Even hard up,
few would get it on with a Minotaur—not to say he hadn’t before.
Movement in the
shadows across the stream caught his sharp Troll eyes. The Kempor watched Ella
make her way down the foot trail until she dissolved beneath their granite
rock. What in the hell did she have in those bags she carried everywhere?

Between the
trees in the dim moonlight, the guard weaved his way along the trail, headed
toward the palace. His huge muscular torso twisted between the towering elms,
making room for the breadth of his shoulders to pass, before his hind end
disappeared from view.

Standing next to
Eli, his underground contact stared at the black space where the Kempor had
stood moments before. The cigarette between her fingers, seemingly forgotten,
the dangling ash long. Wisps of reddish hair framed her oval face. Her inscrutable
expression was unnerving.

Eli touched her
shoulder. “Are you alright?”

A melancholy
frown flitted across her features. Then, she smiled, smoothly betraying nothing
of her inner thoughts. “I’ll meet you again, in two days at the regular
appointed time.”

He nodded and
leaned back on the rock. “May I have your name? Something to call you by?”

She lifted her
hand to tousle her damp curls, and another flutter of bouncing bracelets
erupted. “Yes, now that I know you’re trustworthy. Call me…Pennelope.”

“Be careful out
there, Pennelope.”

She rewarded him
with a slow, secret smile. One, he wouldn’t claim to understand.

Loved Troll-y Yours! A truly original and fun book.