Starting us off today is
Charlayne Elizabeth Denney 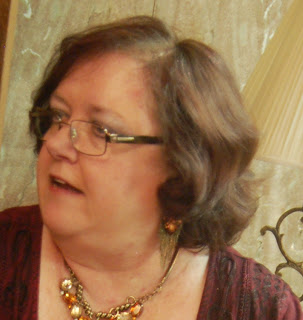 “So, there
are places where I shouldn’t explore on you? What other areas are ticklish so I
can avoid those, the giggling seems to slow my sexual responses down a bit.”

Lilly raised up on one elbow and smiled. “You didn’t know that? Sully, you’re
not very experienced at this, are you?” As beautiful as he was, it was hard for
her to believe that he was new to sex.

“No, I’m afraid not. I’ve watched enough but I’ve never participated.” he tried
returning the smile, not something easy to do. He didn’t know why he was
feeling so timid around her now; it wasn’t like they were new to each other.
But his emotions were in a jumble, he didn’t know where to start, what to do,
and how to act with her with this new situation. His head spun, he was having
trouble thinking, but his genitals were straining so hard he was almost unable
to think of anything but taking her down on her back and screwing her to the
bed. Then he shook his head, wondering again where that thought had come from
and why the image of her under him was so strong.

“You’ve watched. You have never made love to a woman.” she said quietly, taking
in what he was telling her.

“No, I’ve never made love to a woman. Or a man either, for that matter. This is,
I’m afraid, an all new experience for me. I was hoping that having watched
would have made it easier to do but obviously I have not either observed enough
to find out how or I’m missing something.” Talking about having sex was
beginning to take care of that strained feeling in his groin.

“Oh, ok, you’re a virgin. I’ve dealt with this before. I know exactly how to
handle it.” she smiled at him, not seeming to mind at all that he was telling
her how new he was to sex. This also baffled him. “What we need to do is trade
places. You need to slip those trousers off further, get rid of them, and then
lay down here on the bed. I’ll show you what to do.” She talked to him softly,
sitting up and guiding his hand down to the pants around his knees as she slid
away from him and got to her feet on the floor. She put out a hand and helped
him stumble out of the bed and kept him from face-planting as he got tangled up
in the offending pants.

He stepped out of them and then turned to her. He reached out with the intention
of putting his hands on her waist, pulling her to him, and starting to kiss her
again. Even looking at her naked, standing in front of him made him stiffen in
total lust.

She took his hands and turned him, pushing him back to the bed. He backed up
against it and waivered. “Go head, lay down. Let me guide you through this. I
promise it will be good.” she purred.

Nothing of her training back in Mahogany
Hall had left her; she still knew how to please even the shyest of men. She
held his hand as he laid down and tried to arrange himself for her. She reached
down and took the pillows, fluffing them and then handing them to him. He
leaned up and put them behind his head. She was touching him on his chest as he
was doing this, running her fingers through the fine, dark hair there. Once he
was settled, she pulled herself onto the bed beside him, half laying on his
left side, and started running her hands through his hair and nibbling, kissing
his ear gently, pulling his earlobe with her teeth.
He started to turn his head
and kiss her but she put her hand on his face and stopped him, “Let me.” she
whispered into his ear with a small kiss. 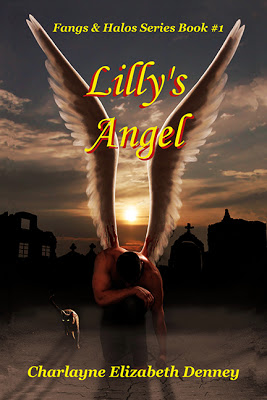 Bio:
Charlayne
Elizabeth Denney was born in Amarillo, Texas and lived there until 1991. Now a
resident of Houston, she has been a waitress, a DJ, a sports writer, a
technical writer, sold knives, swords, and replica weapons, was part-owner of a
comic shop, and a perennial student. She has 4 kids, 9 grandkids, 2 Shelties,
and a cat who is the inspiration for Baron in “Fangs & Halos.” She married
her 3rd and final husband, Bruce, in 1993 after a whirlwind
six-month romance, having met him at a Science Fiction convention and her
sister telling her to “go out with him” (and him overhearing her). She has
written many non-fiction articles, has been published in several magazines, and
wrote technical training manuals for Compaq. She reviews for Paranormal Romance
Guild and loves vampire novels the most. “Lilly’s Angel” is her first novel.
Buy Links:
Barnes &
Noble: http://www.barnesandnoble.com/w/lillys-angel-charlayne-elizabeth-denney/1116466052?ean=2940045208420
Amazon ebook
(Kindle): http://www.amazon.com/Lillys-Angel-Fangs-Halos-ebook/dp/B00EFEBW0E/ref=la_B00EFML0CG_1_1?s=books&ie=UTF8&qid=1380149391&sr=1-1
Amazon
paperback: http://www.amazon.com/Lillys-Angel-Fangs-Halos-Series/dp/0989768503/ref=tmm_pap_title_0?ie=UTF8&qid=1380149391&sr=1-1
Smashwords: https://www.smashwords.com/books/view/345688
All Romance
eBooks: https://www.allromanceebooks.com/product-lilly039sangel-1271372-178.html
Author
Links:
http://www.charlaynedenney.com
http://www.authorsden.com/visit/viewwork.asp?id=60644
https://www.facebook.com/charlayneelizabethdenney
https://twitter.com/Charlayned
*****
I’m looking forward to all the hot excerpts to follow.
If you enjoyed what you’ve read, please say so in comments.
Thank you for visiting Friday Flames!! 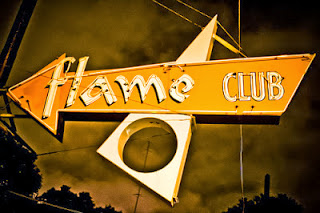