For me, there really isn’t anything better than turning my blog over to someone else. To let them heat up the screen and scorch you senseless.

My guest today will do all that….and more!

Take it away, Felicity Heaton! 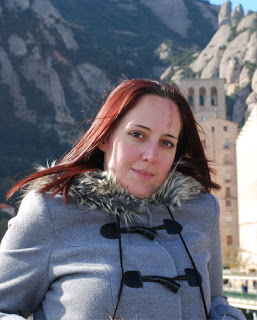 
A powerful vampire lost deep in his bloodlust, Snow is a savage animal, mindless with rage and a thirst for violence, and trapped with no hope of awakening from an endless nightmare… until a song draws him up from the abyss, restoring his sanity but leaving him haunted by the sweet feminine scent of lilies and snow, and fragmented familiar lyrics.

When the mysterious and beautiful songstress reappears in Snow’s room at Vampirerotique, she awakens a fierce protective streak and stirs dark desires that drive him to claim her as his female, even when he knows his touch will destroy her innocence.

A single forbidden taste is all it takes to unleash emotions in Aurora that she shouldn’t possess, tearing her between duty and desire, and luring her into surrendering to her wildfire passion and embracing hungers that burn so hotly they threaten to consume them both.

One act of kindness can lead to one thousand acts of sin though, each a black mark against the bearer’s soul and another grain of sand that slips through an hourglass. The clock is ticking and time is almost up. Can beauty save the beast? 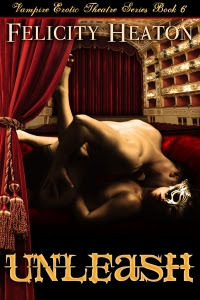 Unleash – Excerpt
Aurora clutched his shoulders, tiptoed and moulded her hot
body against his front, her belly pressing into his hard cock and tearing
another moan from him. She ran one hand up his neck to his hair and her fingers
tangled in it, nails scraping his scalp, driving him out of his mind.

Rain poured down on them and thunder rolled menacingly
overhead.

Snow planted his hands against her lower back, gathered her
flush against him and leaned over her, kissing her harder and losing himself in
sensations that felt foreign to him. It had been that long since he had held a
woman like this and kissed one.

He shook that thought away. He had never held a woman like
this, clinging to her as though his world would end if she escaped his grasp,
and had never kissed like this either, his passion pouring out of him because
it was overflowing and he couldn’t contain it. A dam had burst and he was
powerless to resist the violent flow that swept him along, pulling him under at
times until he felt as though he was drowning.

Lightning cracked above them, the flash registering even
with his eyes closed, and the hairs on the back of his neck prickled. His
senses blared a warning he was too far gone to heed.

The electricity in the air was nothing compared with the
intense energy that blazed between him and Aurora.

Their desire put it to shame, burning
at a billion volts, far beyond their control.

Aurora ran her short nails down his arms, clawing at his
wet skin, and he growled and gathered her closer.

“Need you,” he husked and she didn’t deny him.

I want to read everyone’s excerpts! The HOTTER the BETTER! Make us sweat, make us MOAN! Let us fall in love.

Wow, Felicity! I'll have to check that out – that was a heck of an excerpt to wake up to this morning!

OK, here's my excerpt. This is from my next book, so it's still a work in progress. TO set it up: Sara and Brian just had their first really nasty fight, and they're about to have their first "makeup sex"…

(and here's the link to the current books, on Amazon: http://www.amazon.com/author/jjdibenedetto)

I’m clutching Brian’s hand so tightly that he has to be in pain, but he’s not saying anything. I’m still shaking a little bit. We’re back at Joseph’s house. It’s just one o’clock, and it looks empty; Joseph and Mary are at work, and their son will be taking the girls around campus for at least another hour. The house is empty. We have the whole place to ourselves. We’re in each other’s arms, our lips meet and a moment later – I don’t even know how it happened – we’re on the floor, limbs entwined, my blouse and his… Read more »

Here's my contribution for today's sexy Flames! From the first book in the Centaur Series – Remedy Maker. (winner of the PRG Reviewer's Choice Award and Finalist for the RONE Award in fantasy romance): “Should we practice our joint effort, polytima, and see how good we can be together?” How much hotter could they possibly get? Much as she hated flames, her body burned hot enough to internally combust. “Rhycious!” she cried out, going for a scolding tone. But it came across like a sensual invitation. His arm tightened around her waist, drawing her the wasted millimeter of space nearer.… Read more »

Love Rhy! I'll be back later to see what everyone else has to share!

HOT, sexcerpts today.I'll be back to post one of my own–just have to pick out a good one, lol.

Hey Sheri! Hot huh? Too Grand For Words" by Natasza Waters. “Steven, what did you want me to say? You didn’t even know what to say.” He hooked his fingers around the lace panties that clung to her hips, drawing them down to the chair. Running his hands back up her skin he stopped at her waist. “The truth would have been good.” Grasping her ankle, he guided one foot to balance on the glass of the tabletop. “What’s the truth?” she asked quietly, as he gently kissed her thighs. “That I’m the man who can love you like you… Read more »

Very steamy stuff today!From my contemporary western suspense, Ride A Falling Star: “Levi. I—”He shifted so that she was under him, but he held his weight off her. “You have a rule, Ava. Remember?”She managed a nod. “Yes.” “Rules are rules.” “You’re right.” Her voice came out strangled. He moved his mouth a fraction of an inch closer. “We shouldn’t break rules.” “Probably not,” she whispered, “but—” “But, what?” His lips brushed hers so lightly she wasn’t sure she hadn’t imagined it. “Maybe we could make an exception.” She circled his neck with her hands and pulled his mouth to… Read more »

Hi, Sheri! Here's mine: His masculine need for her seemed overwhelming, but it answered a silent call her body had made. Fara was hot, her blood racing with a growing heat. She felt she would explode or go mad in mere moments if the ache within her was not satisfied. Heedless of anything else, she brought her leg up to hug his other side, following suit as he'd silently instructed her to do. His able hands worked at the buttons of her dress and then eased away the fabric. He loosened the laces of her corset and removed her shift.… Read more »

Loved reading the excerpts from everyone and Felicity I have to check out more of your work!

Inleash sounds FANTASTIC and wonderfully naughty. (My cuppa) From WIP- Bk 3 in the Swamp Magic Series Dead Man Rising "She also wanted Trick shaking with need. She wanted to send him over the polite edge into no man’s land where only here, now and fucking existed. No storm, no past mistakes, just them. Coupled. Making love was great. It fulfilled both the body and the mind. But then times like these came along. When life turned so damn deadly and wonk ass backwards, only a hard, true take me now fuck could ease what ailed. This was one of… Read more »

Thank you. Here's mine from Viking Fire, it's the first time Kaireen and Bram are alone and she recently discovered they are to be married within a fortnight – even though he his a Viking, one of her enemies: Outside he released her, but blocked her path to re-enter the hall.The music resonated around them. Leaning against the far wall, she crossed her arms.She was two feet away from him, but he was too close. “I thought the air would clear your head.” He cocked his eyebrow, examining her. “My head is fine, thank you.” “Aye, and the rest of… Read more »

These are such hot scenes!! Thanks to every one for sharing. I don't have anything today, but soon!