Looking forward to everyone’s HOT scenes today. Go ahead, scorch my screen. I dare you! (Don’t forget to leave your buy links)

I’m a supernatural kind of gal. I write about mythological creatures and I’ve created a unique world. My flaming guest also writes with the flare of the supernatural. 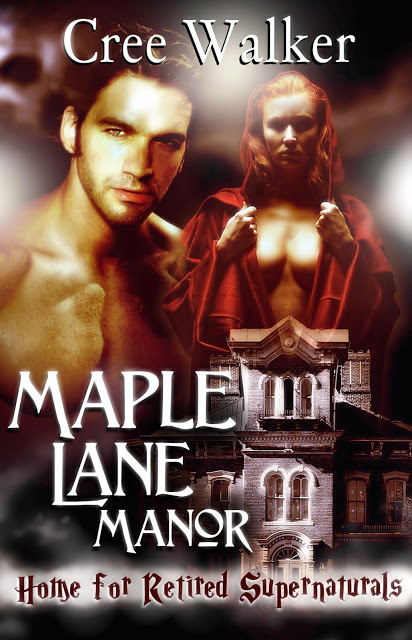 2013 Finalist for the UPAuthors Fiction Challenge


Blurb:
A lighthearted Paranormal Romantic Comedy…
Maple has spent the last decade, switching from one college major to
another. She’s so scared to make a mistake in life, that she’s having a little
trouble getting it started. Never quite knowing her purpose, the decision is
suddenly made for her when her vampire, grandmother mysteriously passes away and
leaves Maple Lane Manor, and it’s four elderly supernatural residents in her
care.
Upon arriving home for the first time in ten years, Maple is stunned to see
that the Manor isn’t the pristine, stoic, hill top wonder, it once was. She soon
finds out that the condition of the house isn’t the worst of her problems. Money
issues caused by a decade of Maple’s lengthy, “college experience” have put them
deep in debt and now it’s up to Maple to save her namesake and the only family
she’s ever known, from being taken away.
To help her Derek Holt, the dashing and mysterious handyman, a drunk witch,
a grumpy werewolf, a semi-lucid wizard, a former starlet/part vampire and a
little parrot named, Batman, will do everything in their power to support Maple
in her impossible battle to save the Manor from debt, decay and her high school
arch nemesis, over zealous real-estate agent, Stacy Monrow.
Will Maple be able to save her home and her family or is the Manor doomed
to die along side its longtime caretaker, Nancy Lane?
* * * * *
Excerpt:
Derek had gone straight to his room, so I didn’t expect to
see him again, but he was standing in his doorway as I tried sneaking
passed.
“Is everyone tucked in?”
I clutched my chest with one hand and covered a scream with
the other.
He gave me one of his crooked grins and gently pulled me into
his room, closing the door quietly behind me. “You didn’t think I was going to
let you off that easy, did you?”
“I was hoping.”
He cocked his head. “Were you, now?”
Sort of. I nodded emphatically.
He shook his head slowly as he closed the distance between
us. “I’d have to be a dead man to allow you to get out of that dress without at
least offering my assistance.” He leaned down and kissed me lightly.
“You’re gonna be a dead man if Walter finds out,” I
said.
He grinned and slid a hand up my bare back beneath the silver
chains. “I’m just helping you out.”
Of the dress, or other things?
“I have to go take a shower,” I said breathlessly.
“It’s the dry season, and your shower today must have taken
close to an hour.” He leaned in again, and I felt him grin against my throat
before he kissed me just above my collarbone.
He was an incubus. Of course he’d know about my special alone
time in the shower. And as of late, that time was becoming embarrassingly
frequent.
“I’m afraid if I don’t help you out tonight, we’ll run out of
water by tomorrow.”
“Just to be clear, you’re not talking about the dress
anymore, are you?”
“That’s part of it, yeah.”
“Are you sure? Maybe you just need a cookie or
something.”
In response he put his forehead against mine and gripped my
ass, pressing me against the door with his body. “I don’t think that’s going to
cover it anymore.” His voice came out all husky and wanting, the way I’d always
imagined it.
“I don’t think a shower’s going to do me much good,
either.”
He chuckled. “I was hoping you’d say that.”
* * * * *
Buy Links:
http://www.amazon.com/Maple-Manor-Retired-Supernaturals-ebook/dp/B00E5GSOLC/ref=sr_1_1_bnp_1_kin?ie=UTF8&qid=1375273328&sr=8-1&keywords=maple+lane+manor
Amazon UK
http://www.amazon.co.uk/Maple-Manor-Retired-Supernaturals-ebook/dp/B00E5GSOLC/ref=sr_1_1_bnp_1_kin?ie=UTF8&qid=1375273520&sr=8-1&keywords=maple+lane+manor
Kobobooks
http://www.kobobooks.com/ebook/Maple-Lane-Manor-Home-For/book-sr9Sfum2nke2Dgoe0Wd1_Q/page1.html?s=zoCcUTcS-Ua6EvBmaErsMw&r=2
Allromanceebooks Not Up Yet
Goodreads
http://www.goodreads.com/book/show/18219585-maple-lane-manor-home-for-retired-supernaturals
Smashwords
http://www.smashwords.com/books/view/340963
Indigo
http://www.chapters.indigo.ca/books/item/9781927415764-item.html?s_campaign=aff-001-1944216-Goodreads%2C+Inc-ProductCatalog-10408997-2227948
Barnes & Noble Not Up Yet
Author Links:
http://www.creewalker.wordpress.com/
creewalker@hotmail.com
creewalker on facebook.com
Subscribe

Love the line: "Maybe you just need a cookie or something." Awesome! Sounds like a fun read!

Hehehe, I like what came AFTER that line! Thanks for coming by, Jenn!

sounds really good. another for my TBR list. All the best on its release

I admit to my girl crush on Cree. I picked up one of her books as a freebie and have been hooked ever since!

I love this! Definitely on my TBR pile, too. I liked the cookie line as well! I've got a little bit of heat for Friday…from my first book, "Dream Student": Sara’s holding Brian’s hand, they’re right outside her room. Sara’s just aware enough to realize this is as much a memory as it is a dream. The night is replaying itself for her, and it’s better than any plain old dream could ever be. She’s holding his hand and turning the doorknob. She hears his voice, asking hesitantly, “Are you sure?” She doesn’t answer with words; she simply opens the… Read more »

All right, James! Where the heck is your buy link?? Excellent snippet and we gotta read more!

Sorry 'bout that! Here it is…

I'd like to thank everyone who left a comment today. I really hope you all enjoy the book! 🙂

AHHH, Cree, your excerpt was excellent. The sexual tension by the end was fantastic.

Here's mine from my newly released novel, Prophecy's Child. Just before his lips claimed hers, Katherine found her voice. Pushing against Kal's rock-hard pecs, she leaned back. “I…I…we shouldn’t do this.” As far as denials went, this one was weaker than a newborn foal’s legs. “Why?” His minty breath fanned across her mouth and jaw. “Because, it isn’t right.” Liar! He frowned. “Never say what’s between us isn’t right, or isn’t beautiful. Isn’t perfect.” His lips crashed into hers with a kiss full of hunger, desperation and ownership. Desire roared to life, wiping away her arguments. Her arms twined around… Read more »

Great excerpts. I like the bit about the cookie as well. Here is mine from The Temptation of Lady Serena, which is rolling out on pre-order. It's not a hot as the others, but I hope you'll like it anyway. His hands skated over her shoulders to her buttocks. Serena swallowed and a tremor slid through her. Her voice was low and sultry. “Do you have some time?” Robert smiled and swooped to kiss her. “I thought you’d never ask.” “We can’t be long. I’m on my way to see about the flowers.” He steadily walked her back toward a… Read more »

Robert, you playful parlor dog! I'm sure Serena loved every moment of it – as much we've enjoyed reading this!! SQUEE on the pre-order! Thank you for stopping by.