It’s been exactly one week since the release of Troll-y Yours. 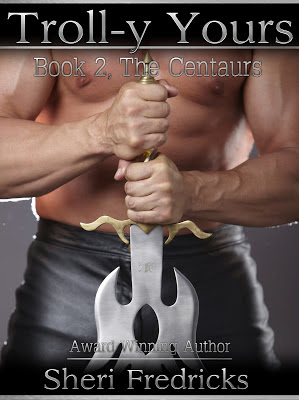 In my book, that’s cause for celebration!
So let’s have some steamy SEX!
Excerpt
“Al.”
Alek squeezed his eyes shut. The
breathy sound of his name on her delectable tongue would be his undoing. But he
wanted his name, his full name, to
pass between her lips before he tumbled them over the edge.
“My name is Aleksander. Say it.”
“Al…”
He hooked his arm around one of
her knees, lifting her leg high. Pulling back, he drove into her hard.
“Oh, yes! Yes…Aleksander.”
“That’s my girl.” He added a
playful slap to her ass. “Say it again.”
This time Ella’s voice strained.
She arched and threw her head back. “Al…Aleksander!”
“Yes, Kalos?” He pounded her in earnest now, his scrotum tightening,
pressure building. If he gritted his teeth any harder, he’d chip the points
off. Strain of holding back was almost painful, and he closed his eyes tight.
Ella’s short nails sank into his
skin where she gripped his forearms. “I’m—Holy Titans!”
Faint spasms gripped the head of
his deeply buried cock. The milking sensation moved up his shaft with
increasing strength and speed. Beneath him, Ella’s body bucked. She cried out,
moaning long and low. Her small hands moved to cling to his back and if she
drew blood, he could really give a shit.
This was ecstasy at its peak.
The best he’d ever had.
With a subtle shift, Ella reached
down and grabbed a handful of his hardworking ass, pressed him into her and
forced him to lag his frantic movements.
“Gods,” he moaned. “Please.”
The slide and drag was more than
he could bear, his whole body felt the sensation. Tight, wet, hot, she
enveloped him. She moved beneath him in a slow pumping rhythm.
He didn’t last long.
Explosions of white-hot rapture,
and he was there. Aleksander stiffened his arm braced beside her shoulder,
slapped his hips once more to hers, and let loose his climax.
Buried deep, liquid energy
erupted from his body into hers, creating a shockwave that ripped him in two.
Time stopped. The forest fell
away. All that remained was a perfect female Troll who gathered his depleted
body close.
****
Troll-y Yours, Book 2 of the Centaurs Series
A BBW Erotic Fantasy Romance
Grab your copy HERE.

Readers: Post a comment (if you’re not too shy!). Let us know if we’re fulfilling your fantasies.

Wow – that was one hot scene. Going to get a cold glass of water after I post my snippet. It's not a hot – just a bit steamy.From the 3rd book in my Circles Trilogy – Circles Interlocked. Robert returned with a large glass of cold orange juice. The ice cubes tinkled against the sides. Julie's naked back was to him. He reached around to hand her the drink. "I could tell you were tired, and trying hard not to let me see it. I knew what I was doing. Although, it wasn't exactly what I'd planned out for… Read more »

Hotness overload! Victoria, you've done it again! I really enjoyed those last 2 sentences. Hehehe Thanks for coming by and warming me up!

Love. Love . Love. That excerpt. Whew!Here's a tiny one from Capri's Fate. "I think it's running water. Come on, this way." Thall pushed more brush out of the way and headed in the direction of the sound. Stepping from the shadow of the forest, he shaded his eyes from the bright light as he stood in a clearing nestled beside a small lagoon with a cascading waterfall."It's spectacular." Capri stood next to him.He glanced at her breasts and grinned. "The scenery's nice. Those are spectacular. And I think I need to suck one." He stepped in front of her,… Read more »

Trolls! I love trolls!!! Here's a bit from INFAMOUS. Don't know if it's flaming – but it's fun and pretty steamy.*** “You kids stay out of the house while you’re wet. I’ll find the chips.” Jessica’s eyes flew open at the sound of Bitsy’s voice. Morgan had gone still. She clutched at his shoulders, straining to hear what was going on outside the pantry. Bitsy’s sandals slapped against the floor as she passed the pantry door. Jessica could hear her put a bowl on the counter and begin rifling through the bags of supplies stacked on one counter. She pushed… Read more »

Ha! I love this, Irene! So very original – and in the pantry! LOL – I'll never view kids parties the same. Well done! Your steam level is top notch. Thank you very much for coming by and sharing your scene.

Love the excerpts. Here's mine from Storm of Desire, my award-winning erotic novella.She slipped her hand between them to caress his cock, marveling at the thickness, at his masculine power, wanting him, needing him, to fill her. “Aiden, please.” Her words came out on a tortured breath. “Not yet, sweetheart,” he growled. In one swift movement, he tugged her nightgown all the way off and flung it to the floor, then lay on the bed and settled her next to him. She shivered at the sudden draft of cold before he grazed his hand over her breasts and down her… Read more »

Perfect ending to your snippet! Well done 🙂 I look forward to reading more of your excerpts on Friday Flames!

I like that word: sexcerpt
Thanks for stopping by, Brenda! Looking forward to your next release – Prophecy's Child (SQUEE!)

Hot excerpts everyone!! Sheri, I can't wait to read this book!!!

Snippet from my new release Cinda's Fella: http://www.evernightpublishing.com/cindas-fella-by-nikki-prince/ Besides their breathing, the only sound in the room was the rasp of her zipper as he undid her denims then pulled them down over her hips. They pooled at her feet and he picked her up and settled her on the edge of the desk, causing her jeans to slip off and onto the floor. She was in a pair of silk bikini panties and a t-shirt that was emblazoned with her business name, Midnight Cleaners. He drug his mouth from hers. “This is your last chance to say no…” He… Read more »

OOOOh! I like this, Nikki! Love the spin on the fairytale. I can tell this is going to be HOT HOT HOT! Thanks so much for sharing.

Thanks so much Sheri. I had loads of fun writing this story and the others in the series.

Hi Karen, thank you for your comment! The weather may be cool in some parts, but it's hot in here today. 🙂 I hope you enjoy the book.

Sheri, and everyone else, these are some hot excerpts. Mine is from my second Regency novel, The Secret Life of Miss Anna Marsh, which release for pre-order in June. It might be wrong, but she wanted this. Streaks of intense pleasure coursed through her as she responded to his caresses. She could barely think, but she had so many questions. How could he make her feel like this? How did he know what to do? And if this was what a man and a woman did together, how could any woman not like it? Her body ached and wanted more.… Read more »

Very sultry, very good. I'm left to wonder what he did with her gloves! LOL Congratulations on your next release, Ella. I love the title of your book.

Thanks so much, Sheri!!

All I can say is wow. Here is one from my latest, Daughter of Night, historical fantasy with Greek mythology–Two mortals are caught in the midst of the battle between the Titans and Olympian gods. “Stop,” he ordered. Taking Becuille's hand, he pulled her toward him. Holding her chin with his hand, he forced her to stare into his eyes. “In the bedchamber, I wish you to look at me. In here, I invite spirit.” He glanced at Ninuba “Leave us now.”“Whatever you wish, Lord Callileon,” Ninuba answered, her voice tight, barely containing her outrage.The bed shifted as Ninuba rose… Read more »

Well jeez, talk about heating it up! Awesome excerpts!

Yay! So glad you made it. Aren't these just slap-your-ass delicious today??

you over heating my pc
Iwisely brought popcorn.
but cant type