Laugh Out Loud with Melodie Campbell 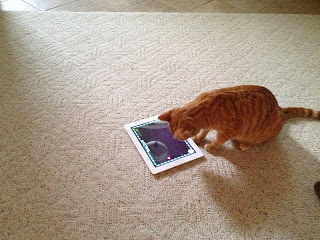 Online, I recently met a warm and funny author named Melodie Campbell. Her wicked sense of humor keeps me in stitches and stalking  looking forward to her posts.

I’m happy to have Melodie visit my mythic blog!
Writing Comedy – and Loving It! 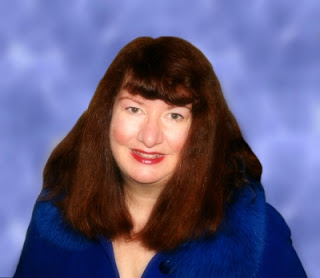 “I
had the flu once.  It was terrible.  I couldn’t eat a thing for three hours.”

I hope you giggled at that line.  I think it’s one of my best.  And yes, I am a tad fond of eating.  In fact, you could list it as my major hobby.
My name is Melodie Campbell, and I write
comedies.  (This is a self-help
group, right?)  Sure I’d like to kick the
habit and write a ‘real’ book with literary merit.
Okay, so that’s a lie.  Leave ROWENA AND THE DARK LORD behind?  Not write a sequel?  I’m starting to hyperventilate.  Actually, I love writing comedies.  It’s in my blood.
Just given a FIVE STAR review by the Paranormal Romance Guild! 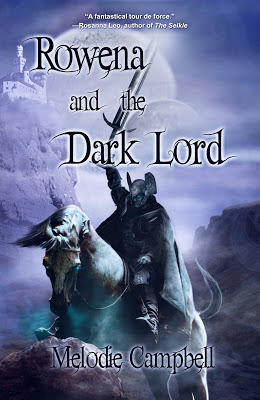 Some people are born beautiful.  But most of us aren’t and we look for ways to
survive the slings and arrows of life.
Sometimes we choose to hide behind a mask.  That Greek Comedy mask was the one I picked
way back.
As a means of self-preservation in the cruel
world of teenagers, I looked for the ‘funny.’
More often than not, I made fun of myself.  This was easy to do.  I knew the target well and there was a wealth
of material.  And it didn’t hurt anyone
else, so people liked it.
When I left school and had a ‘real’ job,
I started writing stand-up on the side.
I rarely delivered it – usually I wrote for others. That led to a
regular newspaper humour column, and more.
So when it came to writing fantasy novels,
I fell back into ‘safe mode’.  Write it funny.
IT’S AN ADDICTION

Worse than chocolate and foreign Counts…
Comedy writers take a situation, and ask themselves ‘what’s the worst
thing that could happen now?’  And then,
what’s the funniest?
But why do it?  Why does an
otherwise sane individual write zany and some might say silly comedy, and risk
the inevitable hit from critics who say your book is without great literary
merit?
One reason, and one reason only: many
readers love it.  Their comments and
reviews are heart-lifting.  I’ve
lightened their day with adventure and laughter, and in some cases given them a
story they can escape into, over and over again. Yes it’s true.  It wouldn’t be fun to write if I didn’t have
warm and generous readers.
Excerpt from Rowena and the Dark Lord

I was
beginning to get a very bad feeling.
“Did you
volunteer for this job?”
“Yes.” Howard
was now relieving himself off to my right.
“Why?” My voice was perhaps a little
harsh.
“To get out
of fighting, of course. Everyone says there’s going to be a big battle. It
seemed like a good time to leave the castle.”
I rolled my
eyes. So now I had a complete newbie horse dude who was also a coward to look
after on this trip. Howard the Coward. Lucky me.
“Can we sit
for a bit? I’m exhausted.” He plunked down on the grass. Then he sprang up
again.
“Ow! Ow!
Ow!” He ran around in circles.
“What is
it?” I watched in amazement.
“A bee! I
sat on a bee.”
“Are you
sure it’s a bee?” I said, crossing my arms. “Maybe it was a wasp.”
“Does it
matter?” He was jumping up and down.
“Well, if
it’s a wasp, you’re okay. If it’s a bee, the stinger will still be stuck in
you. So when you sit down again…”
“Ahhh!! Take
it out! Get it out!” He lifted his tunic and bent over.
Ick.
I turned
away. “I am so not doing that.”
Melodie
Campbell achieved a personal best this year when Library Journal compared her to Janet Evanovich.  She has over 200 publications, including 100
comedy credits, 40 short stories, and 4 novels. She has won 6 awards for
fiction.
www.melodiecampbell.com       www.funnygirlmelodie.blogspot.ca
ROWENA
AND THE DARK LORD, book 2 in the Land’s
End series, is NOW AVAILABLE at the special introductory price of .99! (regular
price $3.99, after May 1.)
Buy Link:
http://www.amazon.com/Rowena-Dark-Lord-Lands-ebook/dp/B00CIZZS70/ref=sr_1_3?ie=UTF8&qid=1367004079&sr=8-3&keywords=rowena+and+the+dark+lord
And the one that started it all: ROWENA THROUGH THE WALL, book 1 in the
Land’s End series
http://www.amazon.com/Rowena-Through-Wall-Expanded-ebook/dp/B007B4Q868/ref=sr_1_3?s=digital-text&ie=UTF8&qid=1367012382&sr=1-3
Subscribe

LOLOLOLOLOLOL, loved your post–and your sense of humor.
Nice to meet you, Melodie. I love humor in books! Sadly, my writing tends to lean closer to the dark side of the emotional scale, lol.

Brenda, thank you. It's a pleasure to be hosted here.

Melodie is not only a wonderful lady, but I am pleased to call her a friend. After sharing one coffee with her, I felt like I knew her forever. She is open and giving…and completely talented! Her books make my side split open and her heroes are so, so hot! I am thrilled for her success!

Rosanna, you are what I call a "shining girl" – such a beautiful person. I am honoured by your words.

Two of my Best Buds, together! Making me laugh and grin, what could be better? A delightful spot to brighten my day. Remember everyone: The Cyber Launch Party for Rowena and The Dark Lord will be on Facebook On May First. Come on in and be entertained, and there will be some fabulous novels and swags in the giveaways.
xxxooo's KISSES, SMIRKS & SMACKS ON THE DERRIERE TO SHERI & MEL

LOL!! Great post!! I look forward to reading your work!!

I'm looking forward to reading Rowena and the Dark Lord. All I need is for my whip-lashing boss to stop giving me extra tasks to do so I can have time to read. 😉
Alison (Chief Assistant to Melodie)

Oh boy, two of my favorite people in one place. This is like a cocktail party and you guys are the best hostesses!

Ha, that was an awesome excerpt! 🙂

Thanks for the feature, Sheri! I am -need I say – thrilled to be on this blogsite. Ahem. Hot stuff. Of mythic proportions.

She sounds awesome! I bet her book is too. Love the excerpt LOL.