I couldn’t be happier to welcome D’Ann Lindun to Friday Flames.

D’Ann is a cowgirl in life and heart, and she writes contemporary romantic western suspense. This is probably because she draws inspiration
from the area where she lives, Western Colorado, her husband of twenty-nine
years and their daughter. Composites of their small farm, herd of horses, five
Australian shepherds, a Queensland heeler, nine ducks and cats of every shape
and color often show up in her stories!

Her latest book is Cooper’s Redemption. 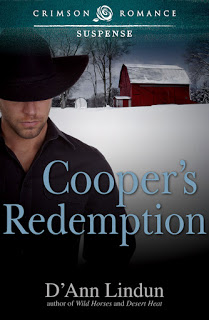 And here’s her Friday Flames contribution:

Taking
tiny, frantic nips along his collarbone, Elizabeth
savored him. She drew in a deep breath. No designer cologne on this man. Only
the clean and woodsy scent of the outdoors. Eagerly, she slipped jeans and
shorts off slim hips.
Breathless,
weak-kneed, she sank on the bed. Sitting on the edge of the mattress, she
folded both hands around his taut penis, until it trembled in her grasp. Loving
the smooth, silky texture, and his reaction, she experimentally stroked him
with her thumbs. An audible gasp escaped him, and she smiled. She smoothed the
tip until his entire body vibrated with supercharged energy.
He
wrapped strands of her hair around his hands, tugging, but not painfully. When
he began to buck against her hand, she released him.
“Cooper, I need you now.”
He
hesitated. “I don’t have anything,” he muttered. “Not with me . . .”
Elizabeth
placed her fingers against his lips, then silenced him with a kiss. “Hold on.”
Getting
up, she went in the bathroom. Rummaging hurriedly through her cosmetic case,
she found a pack of nearly-forgotten condoms in the bottom. They’d been stowed
there for the getaway she’d taken to Tahoe with a group of girlfriends last
summer. The stash was exactly as she’d left it. Gina, Elizabeth’s
best friend, had insisted she buy a box of assorted flavors and colors. Blushing,
Elizabeth protested. The stash wouldn’t have been
needed. She hadn’t exactly been the belle of the ball.
Thank
goodness she remembered the rubbers tonight. Picking two of the plainest
styles—she doubted Cooper was into mint-flavored ripples—she slipped back into
the bedroom.
Climbing
back in the bed beside him, she straddled his thighs, opened the wrapper and
smoothed the contents over his erection. When he would’ve rolled her over, she
teased, “Maybe I’ll just keep you like this for awhile. Torture you a bit.”
“No,” he said harshly.
Elizabeth couldn’t hold back the cry that escaped her lips
when he reversed their positions, moving over her and thrusting inside her
without warning. She hadn’t been expecting that maneuver and pain filled her as
completely as he did. “Cooper, please stop.”
He
only slammed into her two or three times before a shudder seemed to shake from
his very bones before he collapsed on top of her.
Disappointment
coursed through her. How could he be so selfish when it mattered most?   A sigh escaped her. Lovemaking always looked
so great in the movies. It just never matched up to her expectations in real
life. One of the reasons she still had a full box of condoms when her friends
had gone through theirs like bubblegum last summer.

When a soft snore came from Cooper, Elizabeth realized he

had fallen asleep. Oh great. What a perfect ending. Typical. If only

just once she could experience the wonder her girlfriends bragged

about. She was beginning to believe they wre all making it up.

I hope everyone will leave a HOT snippet of their own…and don’t forget a link to find out more about you.

hehehe – all warmed up and no place to go.

Thank you for having me today!

LOL. She tortured him too much… Great excerpt, D'Ann!