I wonder if I ever publicly thanked Horror author Robert S. Sadler for creating my awesome flaming banner…
Thanks Rob!
The Flames had a great turn-out last week with over 180 visitors stopping by. (Just in case you wondered)
I’ve been working on Troll-y Yours, Book 2 in the Centaur series. This is Aleksander’s story – and he’s one HOT dude! 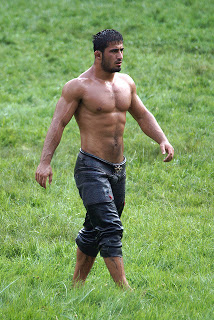 (c)photopin
Troll-y Yours
(unedited)
Kempor Aleksander had thought he’d seen
the sexiest female bodies within a hundred mile radius. Voted Most Eligible Bachelor in Boronda fifteen
years in a row by Mythic Magazine, the woods crawled with hungry babes. Nothing
in his vast experience prepared him for the sight that literally dropped in
front of him.
Lush creamy breasts with raspberry
nipples that his lips quivered to taste. Round curves of her smooth backside, a
delightfully naughty expanse of flesh, called him to stroke with strong passes
of his hand.
Damnit, he was in his true form. Oh
Pan, why do you taunt me so?
Ella squealed and turned a bright
shade of pink. She made a grab for her fallen towel, but Alek reached out and
grasped her arm. He splayed his front hooves and drew her closer.
“Al, stop it. I’m naked.”
“Yes, kalos. You are.” He called her beautiful
in the old language, because she was . . . and more. Satin divine slid beneath
his palm as his free hand moved across her back. The way she wriggled and
fought to gain the damned towel made him smile.
Ella’s face flamed, and she stared
at him in disbelief. “What are you doing? Let me cover up.”
Alek ignored her protests. She didn’t
fight him as if her life depended on it. In fact, if he read the smoky haze in
her pale blue eyes correctly, she was every bit turned on as him—perhaps more.
The very thought swished his tail.
* * *
On your mark – –
Get set – –
GO!

Please leave your short STEAMY scene, and don’t forget a buy link if available.
Thank you, and have FUN!

Whew! Can't wait for this book, Sheri! I also can't wait until I have something to share here…so far all of my stuff is too sweet. My characters would blush just visiting your page, lol! Later this spring, though, I'm definitely going to be back to play. If you need a break to cool down, though, here's my sweeter novella's page! http://www.amazon.com/For-Love-Sphynx-Heather-Sharpe/dp/1481922297/ref=sr_1_cc_1?s=aps&ie=UTF8&qid=1359131900&sr=1-1-catcorr&keywords=for+the+love+of+a+sphynx

Hi Heather! *waves* It's great to see you back at the Flames! I love comments, whether it's to share a post or stop and say hi. Your new release is on my TBR list! Best wishes on it!

My first time at Friday Flames. Thanks Sheri!The following is a snip from my recent release about a 3000 year-old Native American shaman finding his way in the modern world. Veterinarian Livie has no idea the dog she hit with her car and saved, is actually this man she's falling for — The Witchy Wolf and the Wendigo by Rose Andersonhttp://www.amazon.com/dp/B00AFFFESI A short time later, Olivia hurried up the walkway, Ash following behind. Pausing to find the right key to fit into the lock, she said, “I have to file some paperwork before I head home to my—” and Ash… Read more »

Whoo! Great! Mine is from an unpublished ms called Cowboy, Come Home. Slipping to the floor, still caught between his legs, she reached for his fly. Shimmying, he helped her tug off his jeans. He kicked them aside, uncaring where they landed. “Do you have a rubber?” “Yeah. I’ll go get ’em,” he said in a guttural voice. “Hurry.”She didn’t have to ask twice. Adam hustled into the kitchen where he’d dropped the grocery bag with the coffee and condoms. Grabbing the box, he ripped it open, grabbed two foil packets and carried them back into the living room. He… Read more »

D'Ann – this is some awesome stuff. It won't be long before this one is snapped up and in print!!

What a concept! Thanks for sharing your snippet, Rose.

Thanks. If you're interested on the legend that inspired it, here's my post at USA Today http://www.usatoday.com/story/happyeverafter/2013/01/09/rose-anderson-the-witchy-wolf-and-the-wendigo/1822015/

It's a fascinating story given the history.

This is from Revealed, my Erotic Extreme Novel. The couple is taken over by the infamous Marquis de Sade, their secret fantasies are used against them while he takes turns being one or another of them. Some scenes just burned the pages up and I did panic while writing them, lol. I had a reviewer look down on this book recently, she said, RAPE IS NOT SEXY. This poor reader didn't seem to know the difference. I say, too bad for her. The layered fantasy was all woven together, wrapped like a vicious madness inside of a web of ultimate… Read more »

WHEW!!! Set the industrial fans on high, Ms. Leanore Elliott is in the house!

I'm going to need more than this silly glass of iced tea to cool down after that.

Lol Ms. Flames, this was the book, I stopped writing at the middle, scared that I went too far into the heat and the land of sensuality. I sent what I had to Grammy (Gloria) for her opinion. I had a case of the {Moral Doubts}.
She read it, and mailed back: "LET LEANORE LOOSE!" This book has her name(Glory) as a the woman character by the way.
I did get a review recently, saying: Leanore Went too far! LMAO!!!

Man, you ladies are posting straight up hotness! Awesome stuff!! 🙂

HOT sexcerpts. I burnt my eyeballs.

Wow, steamy stuff! This excerpt is from an unpublished mss,"Decade for Darius." In it, Jess learns what happens between men and women abed…. Two fingers traced along the v of her crotch, and she squirmed at the rush of fluid making her crave a primal touch she could not yet name.“Ooh, somebody’s wet.” Darius traced the growing damp circle on her panties to mark what he noticed.“Isn’t that what’s supposed to happen?”“It is.” She felt his lips on the lacy edge, then his tongue trailed as well, making her quiver yet again.He tugged them off and hooked his hands behind… Read more »