Burn, baby burn!
Did you wear the latest in flame
retardant fashion? I hope so, because the Friday Flames will heat you up today!
As most of you know, I’ve been in the
computer hutch cave diligently writing away on Book Two of my Centaur Series. It’s
going well and I hope to have it ready for your eBook reading pleasure by
Christmas.
Meanwhile, I wanted to share some
sizzling heat from another writer. Brenda Dyer (Website) has a HOT book out called Love’s
Prophecy (Amazon). 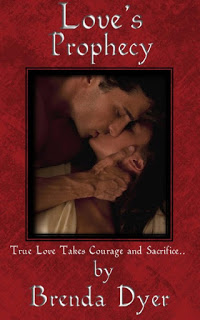 It’s all about vampire love, and like nothing I’ve
ever read before. If you think you’ve had your fill of blood-suckers, wait
until you read this book. You NEED to read this book!
Love’s Prophecy has the Sheri
Fredricks stamp of approval.

You’ll be gnashing your teeth for Brenda’s next book in the Prophecy Series, like I am.
Book Blurb:
Dark warriors of might…

Mel is a vampire warrior sworn to hunt and kill demons in the dark streets of Vancouver.
But he’s burdened with a new assignment: find the meaning behind the Vampire
Prophecy. Having no faith in the gods and their empty words, he believes
there’s no truth to the ancient legend until he meets Breeana, a human woman
who bears the mark of the prophecy and resembles the mysterious woman haunting
his dreams. When a vengeful demon spies Breeana in his arms, she is marked for
death. He must take her from the world she knows until he can eliminate the
threat. But the real danger is the role Breeana must play in fulfilling the
prophecy and the intense feelings she brings out in him. Mel is forced to
choose between his obligations to his kind, the world, and the woman he loves.
Can he turn his back on love to let her go, or will he risk her life and bind
her to him for all eternity?

Veterinarian, Dr. Breeana Spencer yearns for love and companionship, but the
disappointment of failed relationships have taken their toll. She now finds
solace in romance novels. But when she meets a mysterious stranger, she’s drawn
to him by a connection so forceful it shatters all reason, leaving her
incapable of resisting him. Yet there’s more to him than smoldering good looks
and a rock-hard body. As she’s drawn deeper into his danger-filled world, she
learns she’s part of an ancient vampire legend. Breeana fears her future is no
longer hers and will not include Mel. As their enemies close in, desperate to
destroy them both, she must fight to convince Mel her place is at his side. A life-altering
choice is before her—one that will take all her courage and love to make.

Scene: Vampire Warrior Mel has just
met human beauty Breeana inside of a nightclub. It’s time for her to go…but Mel
isn’t ready to let her leave. Nor does Breeana want to. They’re standing
outside in the parking lot next to her truck…
***
His lips twitched before he smiled. The
tip of his tongue flicked out, moistening his lower lip as if getting ready to
kiss her. She swayed forward slightly. Her body unconsciously tried to get
closer to what it craved. At the same time, he leaned in. When only an inch
separated them, she sensed him pull back.
Kiss
me you fool, her mind screamed, but Mel took a step back.
Indecision clouded his eyes.
Disappointment filled her, though logic
told her it was for the best.
A few seconds ticked by before his gaze
once more latched onto her lips. This time he was going to kiss her. In answer,
her heart thrummed wildly and a pleasurable ache hummed between her thighs.
His head dipped and his long lashes
swept lower. She should leave, but her feet wouldn’t listen. Deep down she
wanted to taste his lips, wanted his tongue in her mouth, her breasts pressed
against his hard, broad chest. Right now, she couldn’t think beyond that, nor
did she care.
Afraid he would change his mind again,
she rose up on her toes and placed a hand on his arm.
That was it. The next second his lips
crushed hers with a strength that should have frightened her, but it had the
opposite effect; it sent her desire soaring to heights she’d never felt before.
The taste of beer, male, and raw desire played havoc with her senses.
He gripped the back of her head and his
fingers tangled in her hair as his tongue ravaged her mouth.
She groaned and fisted the front of his
jacket. Her body vibrated as arousal built to a fevered pitch.
His hands left her hair and smoothed
over her shoulders, down to her backside. Cupping her ass, he pressed her
closer.
The force of his kiss changed. He
nibbled, licked and sucked her lower lip before drawing it into his wet mouth.
Breeana wrapped her arms around his neck and molded her body against his,
trying to get closer, but it wasn’t enough. She wanted to unzip his skin and
step inside.
His satiny tongue slipped past her lips
and tangled with hers. Raging desire shot from her mouth to her core. In
answer, a flood of moisture dampened her panties.
A low growl escaped him. He deepened
the kiss, bruising her lips. Breeana felt a sharp sting of pain on her lower
lip, but she didn’t care. With a growl of her own, she kissed him back with the
same passion, clutching at him with desperate hands.
Subscribe

Oh Daryl, very nice. Something about making love in the great outdoors….ahhh. Thank you for coming by today!

Excerpt from Jesse's Brother: Almost to the bedroom. What would it be like? Big bed? Small? She figured it would be clean since the rest of the place was spotless. Nothing was out of place in the bedroom. He had a large, made bed with a warm comforter on it. A small dresser stood in the corner but again, the room was absent of any personal possessions such as family photographs or life memorabilia. She crossed the short distance to the bed and sat down. The idea of being alone in Noah’s trailer without him knowing turned her on, even… Read more »

Hi Wendy! I'm happy to say I picked up my FREE copy of Jesse's Brother. Thank you for stopping by, posting your scene, and this great FREE book!

This is from Jason To Jessica, available at Extasybooks.com and Amazon.com http://www.extasybooks.com/index.php?route=product/product&product_id=3145 http://www.amazon.com/Jason-to-Jessica-ebook/dp/B0057Y9IES/ref=sr_1_1?s=digital-text&ie=UTF8&qid=1328711781&sr=1-1 Mike held me close as I slowly recovered. He reluctantly let me go when I got my feet under me again and it didn't feel like I was going to fold up like a rag doll. We got out and dried each other using all the towels in the bathroom. I got behind Mike and dried the man off starting from shoulders and going all the way down to his ankles. As I drew the towel down I got an up close eyeful of the man. I… Read more »

This is a book to read if you're a bonefide Sci-fi/erotic romance kind of person. I have NEVER read another book like it. Thanks for sharing Starfox!!!

Great stuff as usual! I love the burn! Here is mine from my new WIP – Denim-Clad Cupid. Kenni stepped toward Nick and reached out for the additional pieces. He grabbed her wrist and yanked her against him. With the speed of a snake strike his lips were on hers again, but this time they pressed hard and demanding, devouring her like a last meal but savoring too. One arm cinched around her waist and pressed her closer. The other guided her head, tilting it at just the right angle for maximum connection. Oh God. He kissed her until she… Read more »

I love your title! Great smokey scene, thanks for coming by.

Oh, I love it that you have Love's Prohecy up as a spotlight! A wonderful book!I once wrote a book where the Marquis De Sade was taking people over through a magic mythical heartstone. While writing it? I made that leap to Erotica. He was wicked to say the least…lol From Revealed by Leanore ElliottHer body jerked and she felt herself get wet as he held her hips still and explored her belly with his mouth. She shook badly from the warm sensation of his hot tongue. “Please?” He drew his mouth away. “I like the way you say that… Read more »

Please, please, please! Sweet music to a man's ears. Love it!! Thanks for sharing your HOT scene!!

I am fanning my face at all these great excerpts! Here is one from my new debut release, Last Chances, which is rated #6 in their current bestsellers at the moment. Available at eXtasy Books, and Amazon: http://www.extasybooks.com/last-chances/ http://www.amazon.com/Last-Chances-ebook/dp/B009NO1EQI/ref=sr_1_1?ie=UTF8&qid=1350080767&sr=8-1&keywords=last+chances+ellen+cross Leaning over, Garrick began running kisses down the insides of her long thighs, alternating between the two as he gradually climbed higher and higher toward her moist beckoning heat. The scent of her arousal, the proof visible as it glistened between her pink puffy lips, made his mouth water as he drew in her warm musky scent. His rough breaths sawed… Read more »

Is it like 110* in here, or what? WHEW! I can see why you've made the top ten 🙂 Wow Ellen, amazing writing. Thank you for stopping by and…fanning the flames!

Hi Sheri – this is from my upcoming release (November 5th – Lyrical) A MEMBER OF THE COUNCIL. He wiped a drop of wine off her full, red lips with his thumb. “Is wishing your opponentloses the secret to your wins? Not very sporting, I have to say.” “You didn’t answer my question.” Parris’ eyes darkened. Ty couldn’t tell if her reactionwas based in anger, or desire. He hoped the latter. “And you didn’t answer mine.” Twisting in his stool to face her, he opened his legs andwithout thinking, pulled her close and kissed her. A kiss he’d wanted to… Read more »

Ahh! What's her question?? Lynn – all I can say is Yee-Haw! Lyrical and you have a winner coming soon! Thank you for sharing your excerpt here!!

Loved all the excerpts. This is from Lady Caro's Accidental Marriage. the backstory is that Caro was raped and never recovered. She and Huntly had to marry to protect her from another man. This is the first time she's ever made love or told anyone what happened to her. As he blew on one nipple, it furled into a tight bud before he took it and her chemise into his mouth again. The fire coursing through her threatened to ignite. How much more could she take before she exploded?Soon, she was taking her breath from him. Her fingers gripped his… Read more »

Beautifully written, Ella. You took a scene that had potential to go utterly wrong and made it a moment to treasure. Now that's some damn fine writing. Thank you for sharing your scene.

Great excerpt, Brenda!!! And the rest are smokin' too. This is from my latest release A Hunter's Blade, available now on Amazon http://www.amazon.com/Hunters-Blade-Dagger-Series-ebook/dp/B009KET33M/ref=sr_1_4?s=digital-text&ie=UTF8&qid=1350087581&sr=1-4&keywords=cera+dubois and after January 2 everywhere. Austin is a newly made vampire and hunter of immortals who don't follow the code set forth by his master. Brigit is a Lykan werewolf and has to prove to herself and to Austin that she isn't the one attacking and killing humans during the full moons. ~~~ His eyes danced with hot amusement as he caught her hand and kissed her fingers. “Thirty-three… Thirty-two I guess is where I stopped aging.”… Read more »

I need to read this book! *writes a note to self* Thank you for sharing this HOT shower scene. Slippery and wet…two great combinations!

Wow! These are all really good! Great job, everyone!